How I Hiked the John Muir Trail

Loading...
John Marston, Co-founder of Pilates Anytime, first envisioned hiking the John Muir Trail on his honeymoon in 1989. It took nearly three decades, a Christmas gift from his son, and Pilates to complete his lifelong dream.

In 1988, my beautiful Scottish wife, Grace, and I, were planning our wedding and honeymoon for the following spring while living in London. The criteria for our honeymoon were simple enough: we believed it should be a once-in-a-lifetime event and that it should be unique and special. After much research (at the time, finding inspiration for travel began with bookstore and library visits where we would thumb through books and magazines to find exotic locales), we settled on a location that seemed new and exciting, but we never expected how it would capture our imaginations for nearly three decades. Our destination: the High Sierra Mountain Range of California.

After an overnight stay in Los Angeles, we drove from Los Angeles up the Pacific Coast Highway to San Francisco and toured the northern part of the state, including Napa and Gold Rush country. We eventually made our way to the High Sierras and Yosemite National Park.

Upon arrival at our hotel in Yosemite, we learned the place was completely booked. (Never mind that we hadn’t made a reservation - ah, youth!). It was just our luck that someone had cancelled moments before, and, thankfully, we settled in for the night.

The next day, our luck continued. Grace and I stopped by the Visitors’ Center and learned about John Muir, a Scottish(!) botanist, ecologist, and co-founder of the Sierra Club, who is often called “The Father of Modern Environmentalism.” Struck by both the Scottish connection and our shared appreciation for the surrounding landscape, Grace and I quickly developed an affinity for the man and his vision. And, just as John Muir had been a hundred years before, both of us were overwhelmed by the absolute beauty of this majestic place.

One of the park rangers recommended we hike the first section of the John Muir Trail (JMT) to the top of the Nevada Falls. She explained that the JMT went from Happy Isles in Yosemite Valley to the summit of Mount Whitney, the highest point in the Lower 48 States of the USA. She also warned us that the trail is over 210 miles and has an elevation gain of over 47,000 feet! 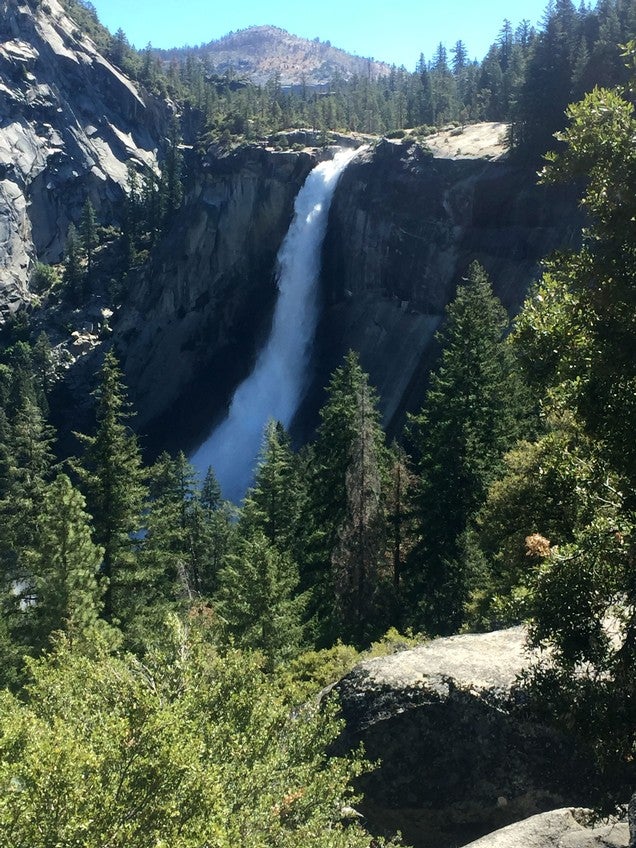 View of Nevada Falls from the John Muir Trail (where Grace and I first stood in 1989!)

Later that day, at the top of the Nevada Falls, after a five-mile hike and 2000 foot of elevation gain, I looked longingly at the trail as it headed off into the wilderness and thought, “One day, I’d like to come back, and complete this journey.” 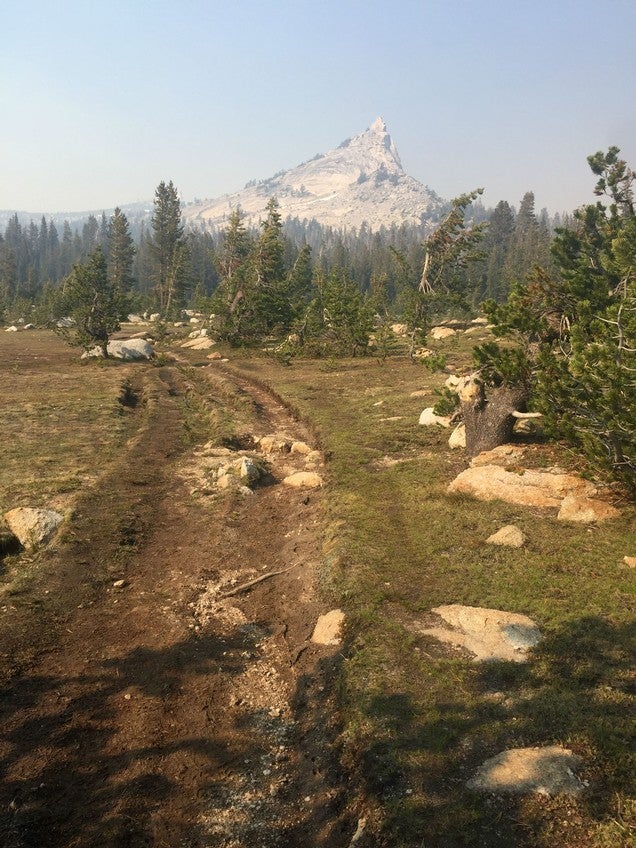 Looking down the JMT towards Cathedral Peaks
I looked longingly at the trail as it headed off into the wilderness and thought, “One day, I’d like to come back, and complete this journey.”

For many years after that first trip, I thought I’d probably never see Yosemite again. But in 1993, we were living in London when the call came that brought us to America (first to Dallas, then to LA). We settled in Manhattan Beach, but the Sierra Mountains always beckoned.

Over the years, my favorite thing to do when visitors came to stay was taking them to Yosemite. After my Dad passed, my Mum flew over from England, and at her request, we celebrated her 80th birthday in the park. For much of my life, in fact, Yosemite has been my personal “happiest place on earth.”

I had often made tentative arrangements with a friend or colleague to hike the John Muir Trail. But growing families and busy work schedules seemed to foil the best-laid plans.

Over the years, I also had made a habit of gifting loved-ones with JMT-themed paraphernalia: coffee table books, framed photos, hiking maps, etc. Perhaps, subconsciously (or not), I had been dropping subtle hints to those who might be tuned-in.

Then, in 2015, whether my surreptitious gift-giving had something to do with it (or not), my son, Andrew, home for Christmas, asked me out-of-the blue if I would join him in hiking the John Muir trail!

If I were him, I’d have been hiking with my mates or taking my hot girlfriend camping - not dear, old dad!

I was grateful and overwhelmed at this surprising opportunity to both fulfil a dream and to do so with my son. I also was enormously struck by this 24-year-old’s awareness and sensitivity to my interests - and by his generosity. If I were him, I’d have been hiking with my mates or taking my hot girlfriend camping - not dear, old dad!

I said, "Yes!" and then, "When do we leave?" Of course, we couldn’t leave right then. There was an incredible amount of planning and scheduling that lay ahead.

Preparation for our hike was four-fold: we applied for a permit; we set a tentative timeline; we physically prepared for the rigor of the trail; we judiciously packed and repacked.

Distance-wise, our goal was to complete the trail in 21 days, heading South from Happy Isles to Mt. Whitney. To accomplish this ambitious (for us) timeline, being physically able to meet the challenge of deep snow, river crossings, and steep peaks was imperative.

I had already practiced Pilates for three years, but now I became a Pilates fanatic. I certainly needed all the strength, stamina, flexibility and focus Pilates provides, and I needed a boost in self-confidence to overcome any hesitancy I was feeling about this thrilling, yet dubious endeavor. 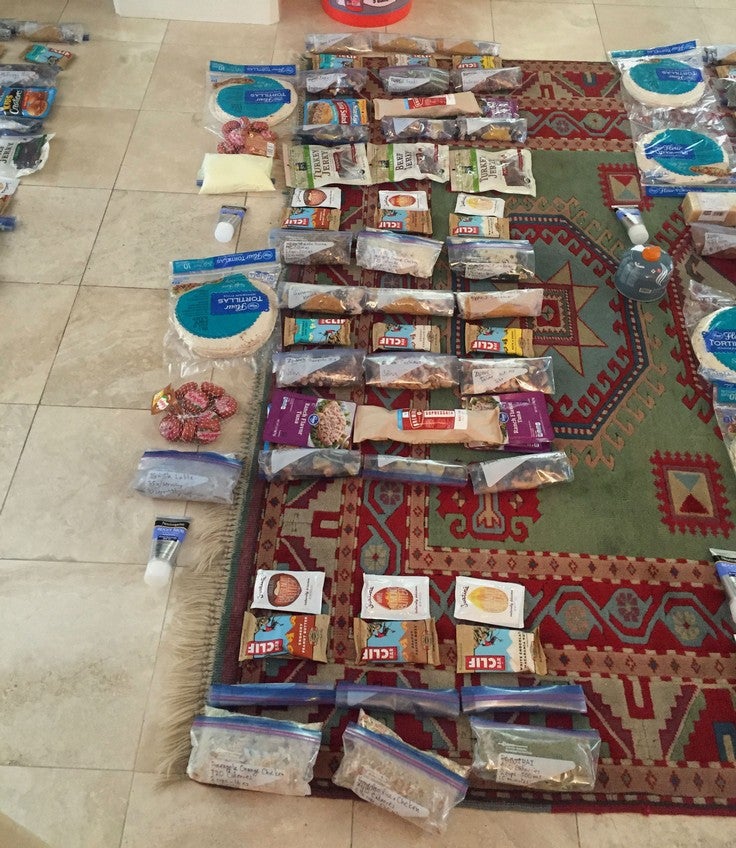 As for packing, that in itself was a lesson in self-discipline. Hikers often do what's called a 'shakedown' (The act of having an experienced backpacker cull through your backpack in search of unneeded items) prior to their treks. Based on the advice of more experienced hikers, we unloaded every extra item that wasn't absolutely necessary to our survival.

In the end, it seemed our survival depended on two words: Clif Bars - smashed, molded and mangled tightly in a bear can. These tasty calorie dense bars were a key part of our diet for the entire three weeks of our trip. It's now been two years since we completed our hike, and despite our offices at Pilates Anytime being loaded with them, I still haven't been tempted to eat a Clif Bar. I doubt I ever will!

Before even beginning the adventure, the National Park Service has a clever way of infusing your ego with a sense of accomplishment and the feeling that fortune already is shining on your trek: to gain entry to the trail, you have to win a lottery! 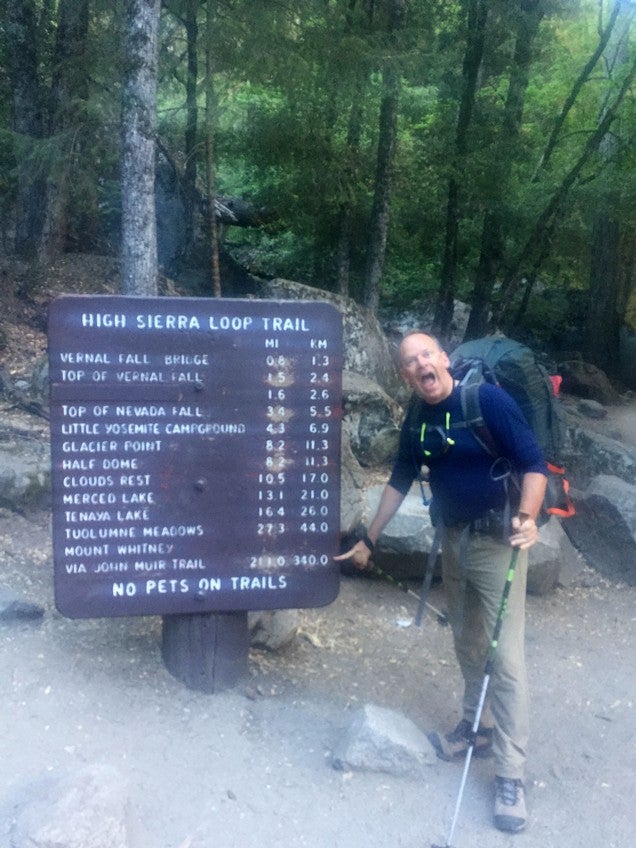 Kid in a candy shop: John at the JMT Trailhead

After winning the permit for our hike and finally scheduling our adventure, we set out in mid-July. As our ongoing luck would have it, the snowpack had been particularly heavy that year, and no one had been able to successfully hike the JMT until a week before we set off. But here we were, middle of summer, off on this once-in-a-lifetime journey with an open trail and beautiful weather. 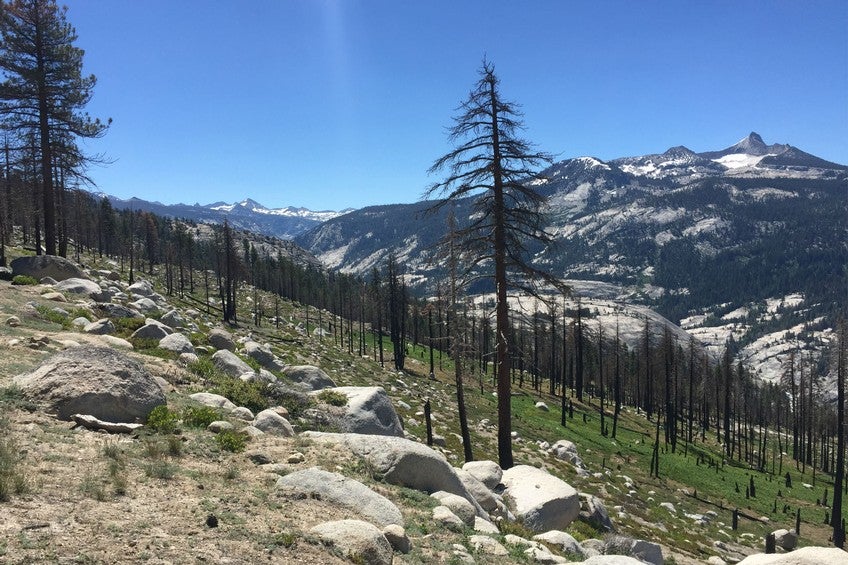 A beautiful summer day on the JMT

A Pact in the Pack

After we set out, and as we moved further along the trail and deeper into the wilderness, there were plenty of moments of self-doubt, to be sure, a waning sense of self-confidence when our minds and bodies were so tired, that having this younger version of myself leading the way at times, kept me on track and moving forward.

It's not often a father and his grown son get to spend three weeks alone, dependent on each other, and disconnected from the race of life. 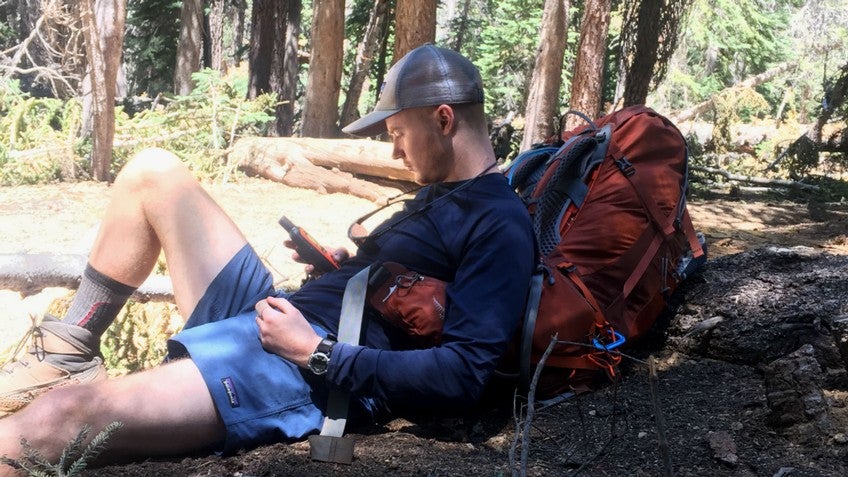 Andrew taking a technology break on his GPS

And when I think back to my conversations with Andrew as we hiked together across this stretch of remote country, there were profound moments of bonding and discussions about balancing the various parts of one’s life, and of recognizing the humanity of the experience - not just for us, but for the other hikers we met along the way. (Even on a bonding adventure, it can be nice to entertain a fellow hiker and infuse the conversation with a fresh new voice.)

...if one of us wanted to leave the trail at any time, the other of us would leave as well. This was our father-and-son solidarity.

But in truth, there was a lot of silence and quite a lot of ‘getting on with it.’ When you’re trekking through snowfields with the fear of breaking through the surface of the snow (that happened) or falling into a ravine, polite chit-chat isn’t the first thing on your mind.

What I can share with you is that we had a pact, an etiquette on the trail: if one of us got too far ahead, we would always wait for the other. And if one of us wanted to abandon the hike at any time, the other of us would leave as well. This was our father-and-son solidarity.

And, then...there was always talk of food.
Get Started with a Free Trial 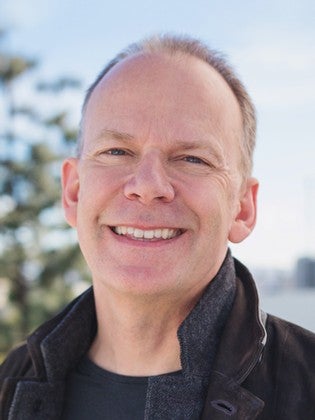 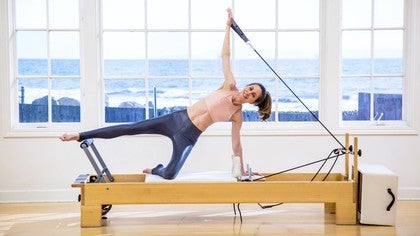 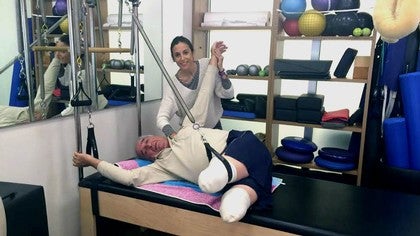 Elizabeth A
2 people like this.
can't wait to hear the trail food talk.
good stuff. i dream of one day doing something similar with my kids.

Move U
2 people like this.
Fabulous story! Looking forward to the rest....

Joni N
1 person likes this.
Oh yes! We began on the Olympic Peninsula 2 weeks ago and have been hiking our way south. Incomparable beauty!!