Jennifer Golden Zumann teaches a class that utilizes traditional Reformer exercises to explore the concept of elastic recoil into the body, which is the natural resilience and rebound effect of our structural tissues. She hopes this will reinstate the restorative animal way of moving in our bodies. Jennifer also includes some thought-provoking wall exercises inspired by Robert Schleip into the workout. We hope you are moved by experiencing the traditional exercises in a new way.
What You'll Need: Reformer 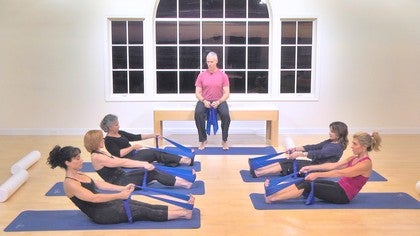 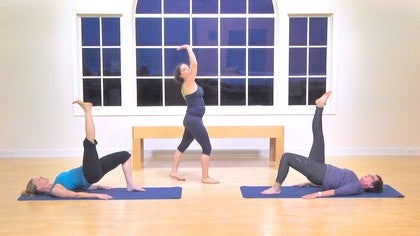 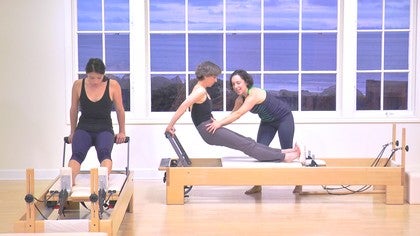 Margeaux R
2 people like this.
Wonderful Class Jen! Thank You for sharing all Your inspiration and that of many Mentors! I Loved seeing Ruth as well!

Michelle E
3 people like this.
I really enjoyed this class! All of the visualizations were helpful. Jennifer had such a positive aura of energy - loved her teaching. Thanks for a great workout!

Jennifer Golden Zumann
1 person likes this.
Hi Margeaux! Yes, Ruth was so much fun to work with! I'm really thrilled that I got this opportunity to share the wisdom of my mentors.

Tiziana M
1 person likes this.
hi! good lesson but...why the head piece is down during footwork on reformer....does she forget it? i think that is not intentional...but the mistake is not little...
tiziana masia -Italy

Jennie S
1 person likes this.
Love your vivid descriptions of the movements and your
Enthusiasm is delightful!
Where do you teach?
Thanks

Jennifer Golden Zumann
Hi Tiziana! Thank you for this question. I, too, learned headrest up. Through years, I have learned many approaches from different master teachers and movement experts. What I have learned most is
1.) always teach the person in front of me, and
2.) Be certain of my goal (the "why")
My intention in Footwork is to build foundation for standing posture and gait. With that goal, I like to allow the natural curves of the neck. In modern culture, we spend a lot of time with "head forward" (driving, computers…) I use footwork to balance the front and back slings by extending the hips and opening the chest with head in line with the spine. They can then translate that awareness to upright positions.
If someone who is too tight to have the headrest down, I do put it up to accommodate.
Watching videos on PA, there are examples of both positions from wonderful teachers giving great classes. Just do what works best for you or your clients :)

Jennifer Golden Zumann
Hi Jennie! I"m so glad you enjoyed the class! My studio is in Chicago.

Tiziana M
hi Jennifer ,sorry for my late answer!
so..thank you for your explanation ..it makes sense for me and sure..first thing ..we always have to teach for the person in front of us!! but i am used to that when i change something of the classicity of the method I say it and normally i give an explanation of the reasons......that's it!! but the energy and enthusiasm in your teaching was great

Lisa T
1 person likes this.
I really enjoyed this class and love your analogies! One can really picture what they are being asked to do.
Top Skip to Latest
Showing 1-10 of 15