Tracey Mallett is back with a Mat Fusion workout that combines Pilates, Yoga, and Dance. She starts with a standing warm-up that works the legs, then works deep into the core, and targets the side obliques and glutes. This fun class set to music will definitely make you sweat!
What You'll Need: Mat

Go to this Program Playlist
This Video
Tracey Mallett is back with a Mat Fusion workout that combines Pilates, Yoga, and Dance. Apr 14, 2014 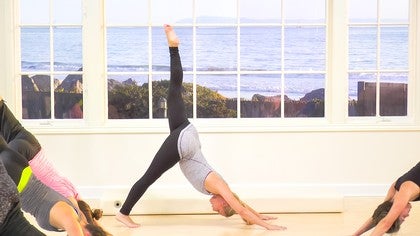 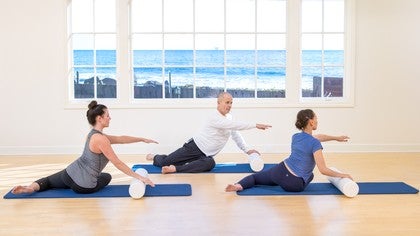 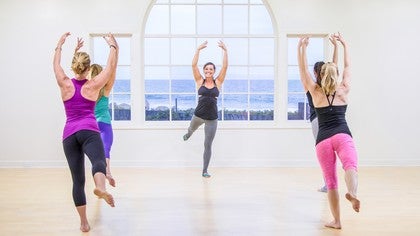 Lourdes V
Great morning working. Felt like an hour of physical exercise. Thanks.

Lourdes V
Great morning working. Felt like an hour of physical exercise. Thanks.

Denee D
Grooovy man! Just what I needed this Monday morning. Can I friend you on FB? Thank you Tracey, so glad you are enjoying the blessings of good health.

Kara C
I really enjoyed the rhythm of this video! Also loved that it was only 34 minutes. I feel great. THANKS!

Heather J
LOVE IT! Thanks for a great class!

Crystal H
1 person likes this.
I didn't make it through the whole video... Which means I will be doing it again!!! Loved the exercises, humor and the classroom setting.

Tracey Mallett
2 people like this.
Thanks guys, so glad you had as much fun as us!!

Emma G
2 people like this.
Very fun! I added a 5 lb. dumbbell in each hand on the single leg lifts with the arms, made it even more challenging! It's fun to push yourself, and you always make it so fun, Tracey. Thanks!

Molly B
1 person likes this.
Excellent class! Love the quick challenging workouts for us busy moms! Tracy you are such a good instructor! Love the creativity.
Top Skip to Latest
Showing 1-10 of 53