Play with the recoil that happens in the springs and your body with this Reformer/Tower workout with Kristi Cooper. She filmed this class after a request from Leelee to follow up her first Reformer/Tower class. She teaches exercises you already know, but she encourages you to notice how it feels different when using this piece of equipment. Have fun!
What You'll Need: Reformer w/Tower

Go to this Program Playlist
This Video
Play with the recoil that happens in the springs and your body with this Reformer/Tower workout with Kristi Cooper. Jun 09, 2016 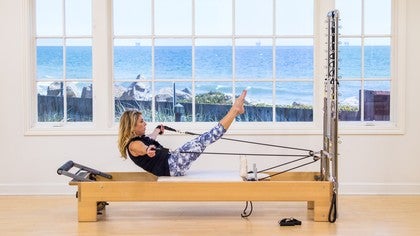 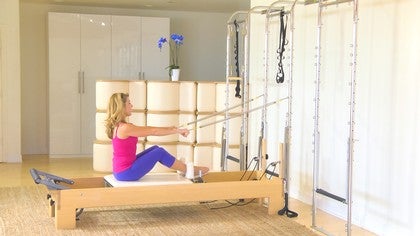 Denee D
1 person likes this.
Trying to spend more time on "me"! Loved this, it was perfect, thanks Kristi!

Connie M
1 person likes this.
That was great Kristi! I loved it!. Thank you! By the way, where did you go on vacation?

Caitlin Meek
1 person likes this.
Loved this Kristi! Thank you :)

Leelee
1 person likes this.
Wow...This made my day! I love it...perfect...Thank you

Jill C
1 person likes this.
A delicious treat! Absolutely love all your classes; you always bring such a lovely mix of discovery, humor, honesty and joy to the experience. Thanks, Kristi! xoxo

Kristi Cooper
Connie, For my vacation I drove to friends from the UK down Pacific Coast Hwy through Big Sur, spent a few days at home in Carpinteria with them then went on to a night in LA at the Mondrian Hotel then on to Joshua Tree. It was really great!

Leelee
1 person likes this.
I decided I'd let you know that I will be using this video a lot it. It hits every area of my body that needs attention and fits my time schedule. I even liked the use of the box that says a lot. The only suggestion I have is for people that are on the shorter side as I am. When you are switching to using the leg springs from the tower on the reformer, you can place the handles on the shoulder rest before getting back on the reformer. It makes things a lot easier.

Michele M
1 person likes this.
Great practice after taking a few days off myself! Welcome back and Thanks Kristi!!