You asked for it! Lisa is back with another Rhythm Pilates® workout but this time even the non-dancers can enjoy the fun. An intermediate workout put to great music and in a sequence much like a dance routine. Learn the sequence in the breakdown class (Class ID #430). This class will make you feel like your on stage even while your abs are burning. Enjoy!
Go to Lisa's website to learn more about the music in this class.
What You'll Need: Mat, Hand Weights

Get Your Sweat On - Playlist 3: Dance Inspired Workouts

Go to this Program Playlist
Tracey Mallett is back with another Booty Barre™ workout! Apr 08, 2013 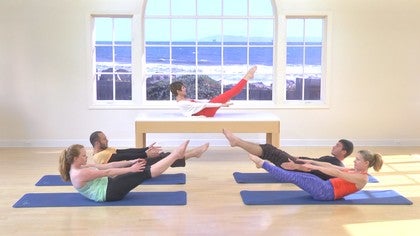 Sherry B
4 people like this.
This was outstanding! What fun along with a great workout. I am a "musical" beat person so I loved this! Great job!

Jeanne D
2 people like this.
Loved the pacing!
Loved the dance feel!

Tammy G
2 people like this.
I absolutely loved this class! so fun and the music was great too! Would you mind passing the music along?? Great all around and I would love to see more classes like this!

Lisa Hubbard
5 people like this.
Thank you all so much for your comments and taking the time to let me know how much you're enjoying the site and my classes! The music can be found on //www.smartsound.com Keep up the good work and the JOY of Rhythm Pilates!

Michelle S
2 people like this.
LOVE THIS!! thank you

Brenda S
2 people like this.
Lisa- LOVED the class! Please post more! The class was over before I was ready for it to be! Thanks!

Lisa Hubbard
2 people like this.
Thank you ladies for your wonderful comments! I'm elated to hear your feedback! If you'd like to try a bit more challenging class, check out Rhythm Pilates class #254 (breakdown) & 253 (complete) workout. All the best

TiannaD
4 people like this.
Please keep these great Rhythm Pilates classing coming, Lisa! I grew up dancing and this is such a fun and fresh way to incorporate music into my pilates routine. Rhythm Pilates has certainly become one of my all time favorite pilates workouts. THANKS!!
Top Skip to Latest
Showing 1-10 of 210