Come get your cardio on and be prepared to sweat in this fast paced jumpboard workout! For starters, Amy takes you through almost 20 minutes of jumping without stopping. You'll review basic leg beats and changes from her previous classes as well as learn some new and more challenging "steps" or jumps. These are intricate and powerful, a fun challenge. A brief transition to get your hand weights and you're off again. Adding light hand weights to the workout continues to stimulate your cardiovascular system and coordination. Amy brings you up to do jumps from Stomach Massage Round Back and kneeling jumping from your hands. Slowing the pace, Down Stretch and a delicious shoulder stretch rounds out this heart-stopping class. Enjoy!
What You'll Need: Reformer, Jump Board, Hand Weights

Go to this Program Playlist
This Video
Come get your cardio on and be prepared to sweat in this fast paced jumpboard workout! Fo... Sep 04, 2012 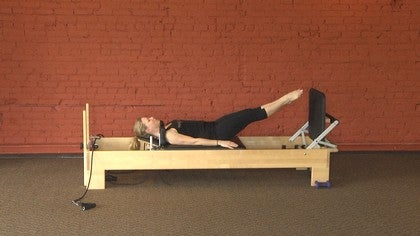 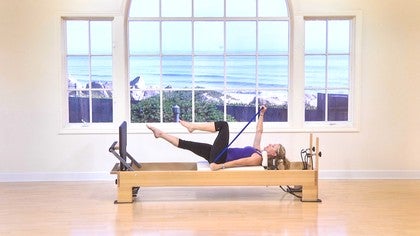 Reformer Workout
Amy Havens
Level 2
35 min
Pilates Conservatory®
#1160
Amy Havens will get your heart rate up with this total-body Jump Board workout. Mar 06, 2014 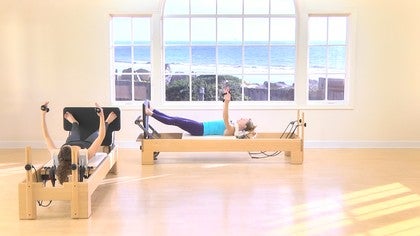 Karin H
I love these short workouts! Thank your adding the ballet jumps for variety!

Joy H
2 people like this.
What a delight to log on, look for your jump board series and see a brand new class! Loved it! I really like the continuous jumping for cardio. Will revisit this one again. Thanks so much, Amy.

Amy Havens
1 person likes this.
Thanks everyone!! It brings me so much joy to read your comments and feedback! Thank you for taking the time to say what you like and give your encouragement!

Kerry
Amy Amy Amy...and people ask me if I lie awake thinking things up! Thanks for getting my heart rate up, love the short time-frame too, easy to sneak it in!

Sabrina B
Such a great short pop in class with great variations. Loved it!

Amy Havens
1 person likes this.
Kerry and Sabrina........ glad you enjoyed the short cardio class! Tried to do just that---make it one that will be nice to pop into and get the cardio done!

Joanne W
Thank you for a great class! I enjoy doing it prior to another pilates class..gives me a complete workout!.....even if I must rest in between :).

Amy Havens
1 person likes this.
Thank you Joanne! Great idea to do this before another class......yes, this little short class may not be enough of a 'full experience' so adding it with something else is fantastic! Glad you enjoyed it!!

Amy Stout
Yay! Just what I have been waiting for :) Lovely as always Amy!
Top Skip to Latest
Showing 1-10 of 52