On July 1, 2020, we talked to Tom McCook about how he shifted his business when the pandemic started and the steps he is taking to re-open his studio. He talks about how you can bring value to your clients by shifting your mindset and offers words of encouragement and advice for teachers and studio owners.

- The Power of Purpose

- The Art of Somatic Coaching 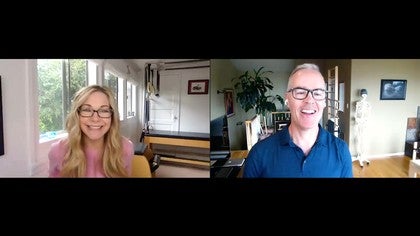 Deanna W
1 person likes this.
I really enjoyed this discussion, with two of my favorite teachers. Lots of useful suggestions, and observations, It's great  to be part of our community. I’m in London and was fortunate to attend Tom’s classes for Body Control. Like Tom and Amy, I noticed that many of my clients have noticeably  improved since having their classes on Zoom. That's so interesting!
Personally I've benefited enormously from the live online classes with Pilates Anytime, and glad to voice my appreciation here!

Tom McCook
Thank you Deanna! Great to hear you enjoyed our discussion and you getting lots of value from Pilates Anytime. Sending you my best from across the pond!

Lina S
1 person likes this.
Thank you. It was a pleasure to listen to your advice. Learn how to serve better: this is the main thing I retain from this great discussion.

Osnat Bechar
1 person likes this.
So so inspiring! Thank you so much for opening my sight and my hart.

Amy Havens
Thank you so much for taking the time to leave your comments Deanna Lina Osnat Bechar !  Your input means a great deal to us!
Top Skip to Latest