Tracey Mallett is back with another Booty Barre™ workout! This express class is great for when you don't have a lot of time but want to feel the burning, cardio, and stretching that you get in a full class. Tracey challenges you with a standing Side Kick series, many variations of Relevés, and so much more! You will have so much fun toning your body in this high energy class!
What You'll Need: Table Chair, Overball

Go to this Program Playlist
This Video
Tracey Mallett is back with another Booty Barre™ workout! Apr 08, 2013

Booty Barre™ Express
Tracey Mallett
Advanced
35 min
BASI Pilates®
No Apparatus
Watch Next
Tracey Mallett combines the Reformer and Booty Barre to give you a fun and energetic class. Apr 22, 2014 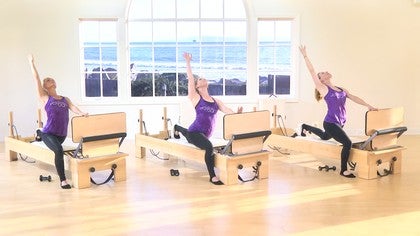 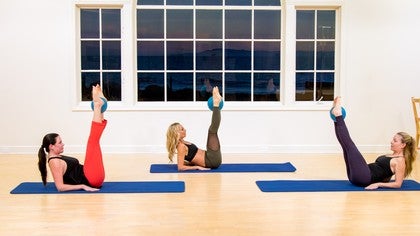 Nagi Takahashi
6 people like this.
I found this JUST when I needed a cardio workout in a limited time!
Got me sweating, oh yes.
Thank you Tracey:)

Viola A
7 people like this.
Tracy, that was a really hard workout and pure joy at the same time, I couldn't have asked for more!

Jennifer S
3 people like this.
Love it...adding this one to my Booty Barre library! Thanks Tracey & PA. Rock on....all of you

Aimee S
3 people like this.
Tracey is an inspiration! She keeps providing the workouts I need as a busy Mom, wife, and fellow instructor. Love her energy and professionalism!

Angela H
4 people like this.
Tracey rocks...thank you so much, beautiful on the inside and out.

Antra C
2 people like this.
You are such an inspiration Tracey! Thanks for this lovely class!

Elayne Connery T
2 people like this.
Oh, this was fun. I only had a short time this AM so this fit in perfectly. Thanks for express workout!

Ana G
3 people like this.
Great challenging work out. I love Tracey booty barre, it really shapes up your behind!!!!

Elayne Connery T
4 people like this.
Great class - 30 minutes works so well some days!
Top Skip to Latest
Showing 1-10 of 123