Cecile Bankston is back with another Mat/Barre Fusion workout. This fusion of a floor barre and Mat Pilates class make a great combination. She starts with great ab exercises, including challenging variations to the Teaser, to get you ready for the floor barre. Then, Cecile teaches Tendus, Frappés, Grand Battements, and many other exercises. She finishes with standing Pliés, Jumps, and Stretching. This class will help you get the dancer's body you want.

This class is a progression from Ceciles first Mat/Barre Fusion Workout. We are so happy that Cecile was able to bring us more of this wonderful workout!
What You'll Need: Mat

Go to this Program Playlist
This Video
Cecile Bankston is back with another Mat/Barre Fusion workout. Jun 10, 2013 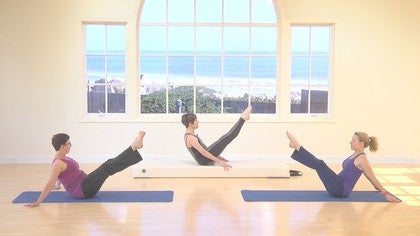 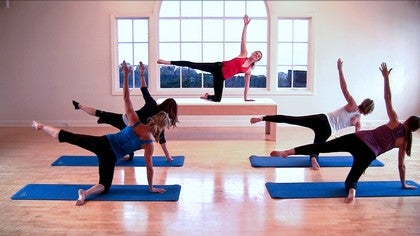 Denee D
You promised and delivered. Loved this, thank you. Any more coming our way? Hope so!!!

Cecile Bankston
I definitely hope so!!

Cecile Bankston
So glad you liked it!

Cecile Bankston
I'm glad Jo, I debated if I should put them in, but I like them too.

AK
Wow--love this class! My inner thighs were burning the whole time! Thanks so much Cecile!

Gia Calhoun
1 person likes this.
Lisa~ Thank you for your feedback. It is always tough to decide the level because it is so subjective. After reviewing the class again, I saw many challenging exercises including the teaser variation and arabesque exercise and decided to keep it as a level 3. Cecile also says it is more advanced than her last Mat/Barre class which was a level 2/3.

Cecile Bankston
6 people like this.
Lisa, I'm sorry I did not reply sooner. My take on this is similar to Gia's response. It is extremely difficult for we as teachers to decide on the level of a class when we do not know, and cannot see our audience. I mean we are talking about hundreds of different people, some are teachers, some are students, and some are just trying this from their homes. Because of that, in my opinion, it is always best to err on the side of caution, especially when one is doing a class such as this that has many different non traditional Pilates movements. Finally, and again I am only speaking from my humble opinion, but, I find that when taking any class...be it machine or mat, that we as students should be providing as much resistance with our own bodies as the machine, or the exercise is. So to lift a leg...pretend that someone is pushing you in opposition both up and down. That seems to help most people! Thanks for your feedback!
Top Skip to Latest
Showing 1-10 of 36