Pat Guyton teaches a Reformer workout with Mat exercises incorporated into the class. To make sure you are truly present in the class, she adds surprises to the choreography that you already know. In this class, you will be able to explore which body part should initiate each movement and find a new way of doing some of your favorite exercises.
What You'll Need: Reformer

Go to this Program Playlist
This Video
Pat Guyton teaches a Reformer workout with Mat exercises incorporated into the class. Sep 17, 2013 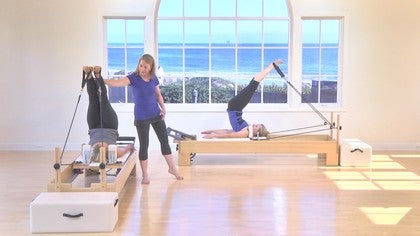 Reformer Workout
Pat Guyton
Level 2
70 min
Pilates Conservatory®
#1216
Watch Next
Cathleen Murakami teaches a Mat workout where you can explore the movement so you can see what you need today. Sep 25, 2013 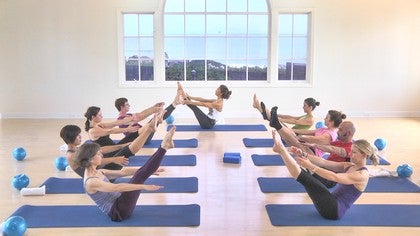 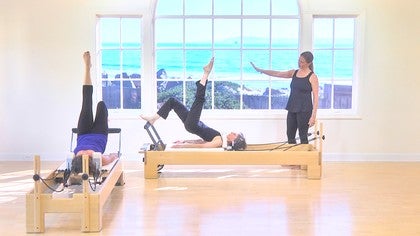 Anne W
2 people like this.
So many new ways to look at "old favorites"! Great cues and visualization. Plus it was FUN! Thanks, Pat!

Pat Guyton
Thanks! I love the dimension of the Pilates work and how things can fit together to make old things new.

Deborah Y
I started my first Pilates training with you over 12 years ago and I am glad that I did. Although I have had much more training since then, my teaching has been so influenced by your attention to detail, pure graceful efficient movement, and passion for the work. Thanks Pat ...you are a wonderful teacher.

Pat Guyton
Hi Deborah! I remember you, too. It makes me smile to know that you have continued your studies. Perhaps we will see each other again...

Yugonda D
1 person likes this.
shaking my head with a case of the WoWs Im so impressed !!
what a wonderful class, loved the transitions and just when I thought I knew where we were going movement changed, as you predicted :)
Thank You !!!

Teresa M
So grateful that I get to learn from my favorite teacher whenever I want. Thank you, Pat for your insightful cues, innovative exercises, and humor. Spine stretch before forward rowing and your spinal flexion and saw exercise seated with feet in the well were big hits for me.

Amy Havens
Pat is a master at getting her students (I'm so lucky!!!) to go deeper, to think---but not too much--- about what's intended in the exercise. So much is logical and Pat empowers this simplicity. She gets me to give the most of myself, always! I love my teacher!

Pat Guyton
Thanks Yugonda! That is exactly what I was hoping to do...challenge the expectations within the Pilates syllabus.

Pat Guyton
1 person likes this.
Hi Teresa,
Rende Brockwell, who is my assistant at Pat Guyton Pilates, started experimenting with the Spine Stretch on the Reformer. She inspired ME to think and this is my version. It is a wonderful feeling when the students we have taught become our teachers.

Pat Guyton
1 person likes this.
Amy! The best compliment from you to me is your progress! You have reached out into the larger Pilates community and continue to become the teacher that I am proud to have mentored. I did not do it all, YOU DID! Thanks for being you.
Top Skip to Latest
Showing 1-10 of 16