F B
1 person likes this.
great cues for the neck pull!!!! I could do it without struggling my neck and my hip flexors. Thanks!

Jamie K
1 person likes this.
I couldnt find this class??

Loretta Wang
I am also interested to watch this class. Hope it will be back up soon.

Kristen
Great class! Thank you. Loved the leg cirlce work and the push up combination....the triangle cue. So great!

Loretta Wang
Love this class! Many great cues and corrections on several movements. Looking forward to take classes from Pat. Thank you.

Vicki Koutalianou
This was a great class, but I wouldn't classify it as level 1-2... rollover...jacknife, those are much more advanced exercises. Also, & I don't mean to be cheeky when I ask this but when you're referring to the triangle, are you saying 'plop' or 'plot'? Great cues throughout & yes I had a 'neck moment' during neck pull- thanks again!

Pat Guyton
Thank you! My students hated the Neck Pull. For the teacher, this should be a challenge to find new ways to help the student embody the exercise. What person exclaimed, "OH, That is why it is called the Neck Pull!" Now the class loves it.

Pat Guyton
Hello Elaine,
The Franklin Method has been a fantastic tool to help me pose images so they provoke a response from the student. They are simple pictures, as you say, of things that people have experienced. Let me know about your SOS work. I have gotten great feedback when applying this tool to mat work.

Pat Guyton
Hi Kristen,
Thank you for your feedback.
The triangle is a great cue. Everyone knows what a triangle is and the image of keeping it in a horizontal plane or moveing the image in a direction to create functional movement is easy to understand. Teachers can name the ASIS and the pubic symphysis as the "corners" of the triangle when people become more comfortable with the exercises and are ready for more information. Too much, too soon, is confusing and unnecessary. The triangle also defines the "neutral pelvis" which can be open to many interpretations and the differences in anatomy due to genetics, sex, and injury may alter the experience for each individual. I try to find universal tools for teaching.
Top Skip to Latest
Showing 1-10 of 31

A dancer’s floor barre is nothing new. In fact this technique has been around for decades.... Jan 03, 2012 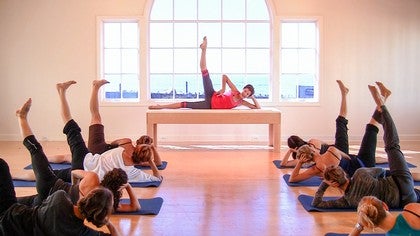 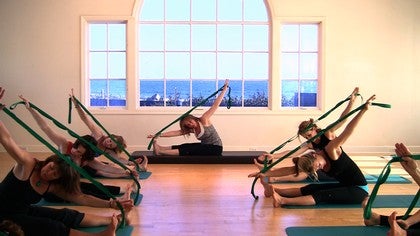 Mat Workout
Pat Guyton
Mod. Pace
Level 2
60 min
Pilates Conservatory®
#569
You will get a full body experience in this Mat workout with Tom McCook. He focuses on cr... Jan 12, 2015 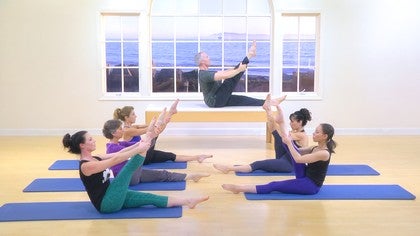