Get Your Glide On!

Glide through this fun, full body workout in this episode of Pilates-ish with Mariska Breland! You will recreate some Mat and Reformer exercises using the Sliders in combination with other conditioning methods that are sure to build some heat into your day. She recommends socks, a towel, or even a Swiffer if you don't have Sliders.
What You'll Need: Mat, Sliders (2) 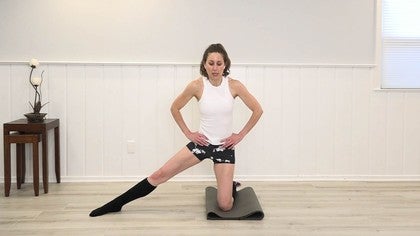 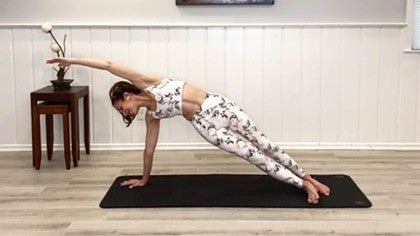 Emer D
2 people like this.
I'm enjoying these classes so much Mariska. So much in fact that I purchased sliders ahead of this class. That was on top of the second yoga block I bought so I could go back to that 2 block class I missed a few weeks ago.  And I have no regrets about either pieces of shopping. While you could certainly do this class without sliders, they were fun to use and I particularly loved using them for the swan and side stretches.  Loud "ahs" of contentment could be heard as I stretched

Rebecca M
2 people like this.
You’re classes are brilliant ... I teach very Pilatesish and you have given me so many ideas and inspiration to keep teaching the way I do thank you 🙏

Nicole B
1 person likes this.
Hi Mariska. Great class. Can you incorporate more moves that are easier on the wrists? I am finding that my profession and my Pilates increase has really been bothering my wrists! Thank you.

Mariska Breland
2 people like this.
Nicole This series has already been recorded, so I can't incorporate anything new now, but in my experience, wrist pain is caused by tightness or (more so) weakness in the wrists. Doing wrist strengthening exercises like grip training (hanging or holding onto something heavy - or more obvious stuff like grip tools) can be really helpful. There are a variety of wrist stretches that can also be helpful. I am not a huge fan of modifying everything for wrist discomfort - I'd rather try to get the wrists stronger (and I say that as someone who used to always feel everything in my wrists and that stopped when I started strength training). But, there are wedges that you can use to lift the heel of the hand above the fingers that help, or doing planks with your wrists neutral (on your fists or holding dumbbells) can also work. Hope that helps.

Sharon B
1 person likes this.
That was really fun and different! I love your classes!

Louise H
1 person likes this.
I love using the sliders ... thank you for doing a workout incorporating this fun prop! Loved every minute!

Eva S
I love your creative variations in this class- thank you!

Mariska Breland
Mariana G thank you! And thanks for your comment in the gliders. You’re right, but for some reason my floors are weird. 🤪 They’re laminate and a little slippery naturally, and for some reason, the fabric creates drag over glide. Also they are cheap and I’m sure better gliders would do a better job. It’s a classic case of getting what you pay for!
Top Skip to Latest