Get ready to towel yourself off in class two of Wall-to-Wall . Alexandra takes you through a vigorous workout that slides you across multiple anatomical planes and gets you sweating. Strengthen your center and move on the Mat in this exciting class!
What You'll Need: Mat, Towel

Wall to Wall: with Alexandra Bohlinger

Go to this Program
This Video
Alexandra takes you through a vigorous workout using the towel that slides you towards a stronger center. Mar 05, 2021 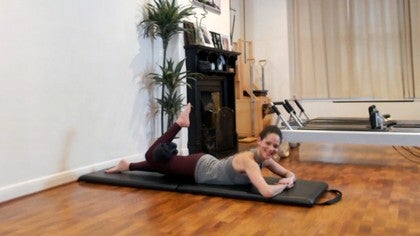 Slide and Shine
Alexandra Bohlinger
Intermediate
60 min
Romana's Pilates®
Mat
Watch Next
Alexandra will teach you how adding a Magic Circle to your workouts will get you sweating on the Mat. Mar 12, 2021 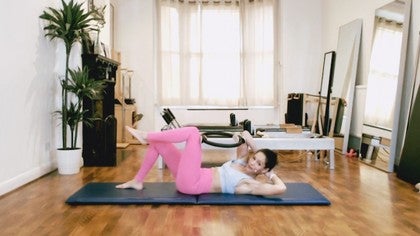 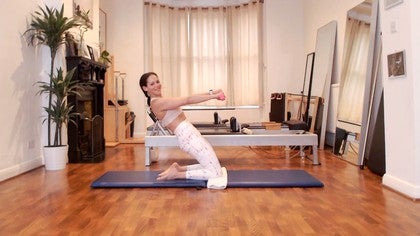 Joni N
7 people like this.
So many "take aways" from my 2nd day of this class. Using  "honest" as a standard truly respects EACH body and its capacity that day. For me it meant that the emphasis was on the work...was my sacrum positioned correctly, was my spine drawn to the floor, were my arms straight  etc,  Viewed like that each and every exercise was an opportunity to improve.  "Baby steps" is such good encouragement to remember that no matter at what level or whatever adaptations I am using that if the exercise is done with  integrity it will strengthen me and move me towards my goal.  Thank you so much for your upbeat attitude throughout the class.

Gary M
3 people like this.
I used to have a teacher that used a towel for everything. So this class was like coming home.  Fun Class. I wore 5 lb leg weights which worked for me. It's good to know I don't have to worry about the Pilates Police raiding my home when I do an exercise wrong:) i got a good workout and feel much better. Thanks again Alexandra!

Lina S
2 people like this.
I've enjoyed the work with the towel. Creative and fun!

Rachel L
3 people like this.
Another fantastic class!  Class one of this series helped me take an honest assessment of how I use my core (for better or worse!), class two guided me through a deeper exploration of my compensation patterns and offered supported ways to reconnect to my center.  Loving this series -- thanks, Alexandra!

Darlene M
2 people like this.
Honest and challenging! Great cues and guidance! Thank you!

Barbara L
2 people like this.
Thank you very much! Great cueing and such a beautiful voice! 👏🏻👏🏻👏🏻

Brian B
2 people like this.
This was a wonderful class. Really creative with the towel in a way that helped me find something new . Looking forward to exploring the whole series!

Genevieve Malcolm
3 people like this.
Superb! Where have you been hiding?? Feel like I just discovered treasure.

Sharon C
2 people like this.
Loved this class. Wonderful instructions and a very helpful build up to flow. Thanks so much

Alexandra Bohlinger
1 person likes this.
Joni N  Yes and Yes! I try to make honest with integrity as my standard of true movement &  always respecting the body's potential day by day (which is different and unique for every person).  I'm so glad you enjoyed moving with me! xoxo
Top Skip to Latest
Showing 1-10 of 18