Tracey Mallett is back with all her energy and enthusiasm teaching Booty Barre™ Basics. This class will challenge and prepare you for the more intense version of this class. Booty Barre Basics fuses legendary fitness techniques from Pilates, Dance, Calisthenics and yoga. You will streamline, firm, tighten and tone your entire body without adding bulk. Creating balance, posture, body awareness, flexibility and cardiovascular endurance. The result is a body that looks and moves 10 years younger!

Go to this Program Playlist
This Video
Tracey Mallett is back with all her energy and enthusiasm teaching Booty Barre™ Basics. T... May 20, 2011 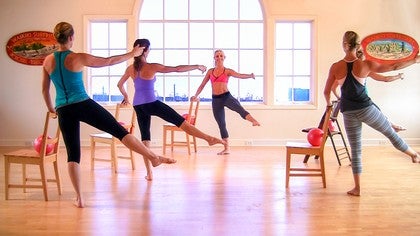 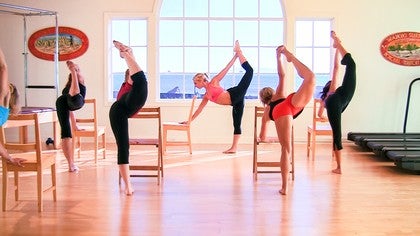 Jennifer S
3 people like this.
Well played...thank you. Looking forward to your next Booty Barre - love to see some "advanced" level stuff. Thanks!

Amy T
1 person likes this.
Great fundamentals. Bring on the next level, Tracey!

Tracey will correct me if I'm wrong, but I believe her other Booty Barre class, already on the site, is a bit more advanced. Check it out here

Amy C
3 people like this.
I guess I'm really out of shape cause my legs were shakin'! Thanks Tracey! I've got to try the one Ted mentioned! I've never done a Booty Barre and I come from dance way back when. This will be good for my old dancer body!

Ann L
The first booty bar Tracy did here was a little too hard for me. This one is perfect. I did it yesterday and I'm sore today!

Nancy Frommholz
2 people like this.
I love this class...I'm soon to be 75 & while it was challenging I was able to keep up...I also taught your jump board class twice & my clients liked it...very clever jumping on your side...Thanks for your creativity

Glaucia Adriana R
Really great Class Tracey!!!! The pace and energy are amazing!! Thanks for sharing!!

Jamie K
I posted that comment for Nancy F. Who had left a repy on the message board.. lol.. Tracy , you are awesome and I love , love , love Booty Barre!! Have your DVD's. Thanks for doing a Basic class for those of us who havent been doing it too long. Great fun!
Top Skip to Latest
Showing 1-10 of 133