Rebekah considers the Roller and a tennis ball her "best friend" when it comes to keeping her body healthy and ready for action. In this class, Rebekah shares her own personal Foam Roller Workout. Release your connective tissue prior to class or your day to help you move more efficiently. Rebekah explains the correct and safe form to use for numerous stretches with the Roller that can be given to increase flexibility and mobility for clients with stiffness or specific issues. Do the entire class and feel great. Repeat it and learn which exercises work best for you to incorporate into your daily routine. Enjoy!
What You'll Need: Mat, Foam Roller

Go to this Program Playlist
This Video
Rebekah considers the Roller and a tennis ball her "best friend" when it comes to keeping ... Oct 30, 2011 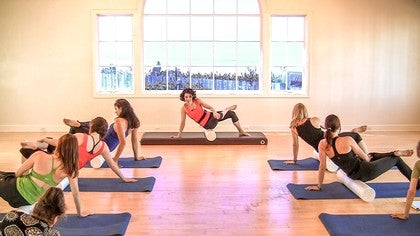 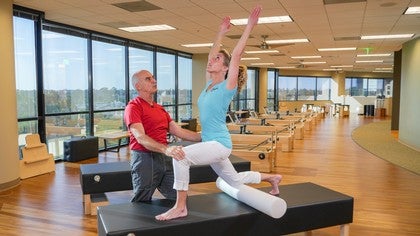 Foam Roller Workout
Rael Isacowitz
Level 1/2
15 min
BASI Pilates®
#1074
Niedra's Mat workout is perfect for days when you are tight because you have been sitting for too long. Sep 19, 2013 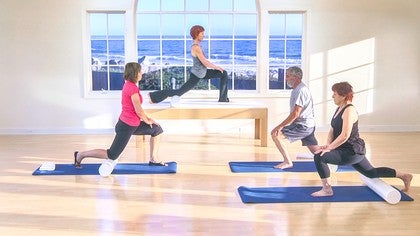 Elaine F
1 person likes this.
The best class ever!! Just what I needed.My mat and foam roller are my best friends.I will revisit this class often.This class would be a good night time relaxer before one goes to bed.Thanks so much for teaching this class.

Mary M
Rebekah thank you for sharing your personal workout. All of these exercises I can incorporate with my clients and also add some of these at the end of my reformer classes!! I don't get to work with the rollers that much - so this is a great addition!! Your presentation as an instructor is awesome! Thanks again!

CJ
I love pilates anytime programe. I have learn't so much, and enjoyed alot of tips I get from the instructors. top quality instructors. your roller is a wonderful class. my ITband is very tight and this is exactly what I need. I also use a golf ball for tight muscles, and breath through it. thank you for sharing with us. blanche

Kirsty H
All the PA classes are super and I really like this one - thank you Rebekah and PA. I love the foam roller and this is the first one which grounds in theory for me - the goal is explained, the muscles identified - so useful! Mwah x

Jamie K
I have long been a fan of the roller and introduce it to my clients that have hip and back issues. I so appreciate this class because I was limited in my knowledge of the many other uses of this wonderful tool!! Thank you so much for this class Rebekah, very enlighting! Love your informative and educational cues!! Would love to attend a workshop of yours. Jamie

Madeline Heise LMT
I've been meaning to use my roller again for a while now.... How could I have gone so long when this is so good!!! I loved the class! Thanks for reminding me!

Betty C
1 person likes this.
Oh to understand Myofascial tissue, and what we need to do to help release it! Thank you for that class. Loved the inner adductor releases.

Patricia W
1 person likes this.
Thank you for your lesson, pls add up some more of pilates with myofascial tissue connections. (maybe on the apparatus).

Colleen Ferguson
Great class!! definitely will be doing these now on a regular basis!
Top Skip to Latest
Showing 1-10 of 66