Michele Larsson, distinguished Instructor and protegé of Eve Gentry, teaches a Mat Class that incorporates a lot of Ms.Gentry's work in relation to the classical Pilates exercises. Beginning much like Eve would, you'll do basic relaxation breathing and then move into imprinting. Using small movements guided by Michele's/Eve's wonderful imagery, you'll begin to see how these movements translate and help execute the traditional exercises more precisely. Above all else, you are likely to feel very good after taking this class.
What You'll Need: Mat

Go to this Program Playlist
This Video
Michele Larsson, distinguished Instructor and protegé of Eve Gentry, teaches a Mat Class t... May 31, 2012 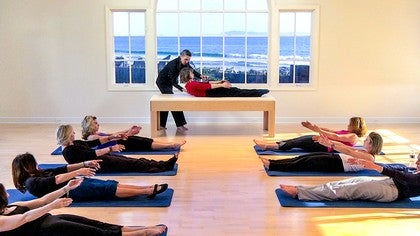 Mat Workout
Michele Larsson
Level 1
50 min
Core Dynamics® Pilates
#715
Watch Next
Michele Larsson shares what she would do in a client's first session in this Mat workout. Sep 04, 2013 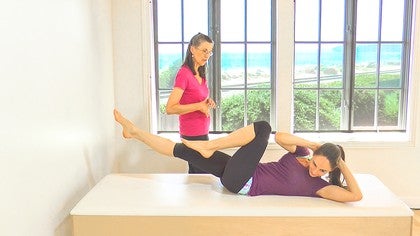 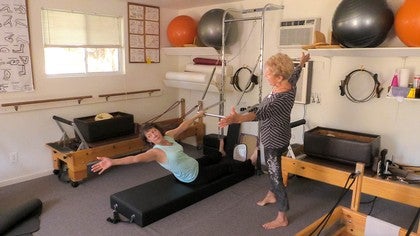 Angel D
5 people like this.
Wonderful to hear Michele's beautiful images this morning! Such ease with effort and her classes always make me feel so refreshed! I loved the prep for getting into teaser. Thanks PA for having and sharing her with us!! Love, love, love her!

Sharon O
5 people like this.
Thank you Michele! Eve Gentry's input in the Pilates world is such a contribution for " every body" to connect with each fundamental move as they build and prepare for the stronger practice. Thank you for teaching through PA--I'm so grateful to be Core Dynamics trained! Hope to have more from you Michele!

Dolly K
1 person likes this.
Thank you Michele! Thank you Pilates Anytime! Michele, the Pilates world is a better place with you in it!

Kimberley P
4 people like this.
beautiful class with great cues and imagery and allowing the body to find its own balance with stability and mobility... loved that there wasnt much chat about muscles and core... more about ease and effortlessness, balance and harmony... would love to see more classes by Michele... thanks

Jill
2 people like this.
Thanks Michele ,loved the subtle links between moves allowing the body to naturally flow. Look forward to more,
Jill Cooper

Lorraine Chamas
3 people like this.
What a pleasant surprise to go on this site and find Michele Larsson! Thank you Pilates Anytime for inviting her!
It is so wonderful to see you again Michele! Great class as always!

Anna Hartman
Love Michelle's classes! Such attention to detail with curing without being over wordy!

Candace
A beautiful class....Thank you..

RT
Such an amazing teacher! Thank you PA!
Top Skip to Latest
Showing 1-10 of 27