Erika Quest returns to Pilates Anytime with colleague and PA instructor Portia Page, offering you a rejuvenating and fun Reformer workout. Warm-up on the Reformer with some isometric and proprioception exercises to help prepare you for the rest of class. In the "Foot Work chapter" you'll enjoy some variations on the traditional theme that results in a good amount of leg work. As the class progresses you'll benefit from a well-rounded workout that includes some effective shoulder stabilizing exercises as well as good arm and abdominal work. Welcome Back Erika!
What You'll Need: Reformer w/Box, Pilates Pole

Girl Time with Kristi and Meri - Playlist 5: Fun with Friends

Go to this Program Playlist
This Video
Erika Quest returns to Pilates Anytime with colleague and PA instructor Portia Page, offering you a rejuvenating and fun Reformer workout. Mar 06, 2013 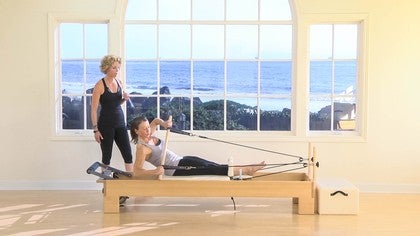 Shoulder Stabilizing Flow
Erika Quest
Intermediate
45 min
Balanced Body
Reformer
Watch Next
Erika teaches a workout that focuses on being strong and long. On the Wunda Chair, she add... Mar 21, 2013 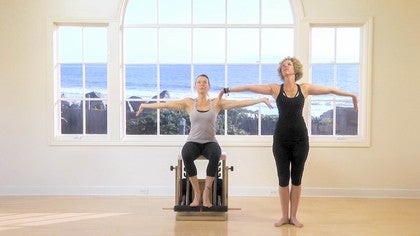 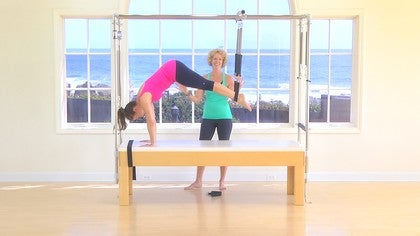 Erika Quest
2 people like this.
Thank you Giovanna! It was a fun one to film AND to have Portia with me was an extra treat.

Kathy B.
3 people like this.
This will now be one of my favorite workouts! Thank you for being so clear on spring tension and body position! I think I will be feeling this one tomorrow!!

Susan H
1 person likes this.
LOVE this. Can't wait to try it all. Wonderful class and so well cued. Thanks for this!

Marge T
1 person likes this.
Wonderful cuing Erika. Thanks so much.

Gabrielle F
4 people like this.
Thank you!!! I have been teaching in West Vancouver, B.C. Canada for 7 years and really enjoyed the fresh ideas in this work out. I have the same reformer in my home studio and found it very easy to follow with your cues.
Can't wait to get onto my machine. Bye.
Where did you film this...it looks like our coast here but sunnier and warmer.

Laurel S
1 person likes this.
Wonderful job, my friend. Especially liked the proprioception work at the beginning, the rowing series with the dowel, and the double leg kicks. Thanks!

Dawn G
1 person likes this.
Erika, what a fun class. I've never watched you teach before and I thoroughly enjoyed it. Cueing and body positioning were awesome. I'm a stickler for form as well.

Erika Quest
Hi all! Thank you so very much for your kind words. I consider it such an honor and pleasure to teach for Pilates Anytime and try to infuse my true teaching style and personality with every workout. Your comments and feedback mean so very much and help me (and other PA teachers) refine and deliver what YOU (WE, because I'm a member too and watch all the time) want. Much love, Erika
Top Skip to Latest
Showing 1-10 of 121