Start Position: Lie flat with legs together and arms by your side. Draw abdominals towards the Mat.

Movement: Inhale as lift your legs to 90 degrees. Exhale as your reach the legs up and over to achieve a C curve in the spine. Separate your legs, flex your feet, and lower them to the floor. Roll through your spine to the Mat and circle your legs down around and together. Repeat and reverse the opening and closing of the legs.

Precautions: Avoid rolling over past your shoulder blades, and maintain a lift in the lower back by reaching your sits bones towards the ceiling.
What You'll Need: Mat 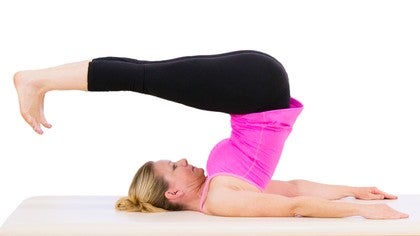 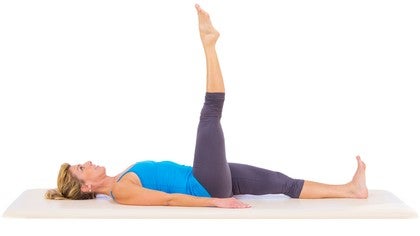 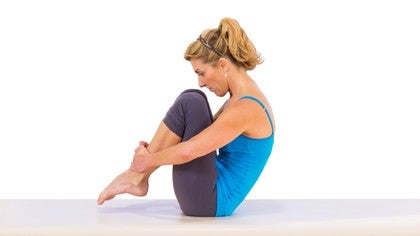 Helen H
4 people like this.
I've been doing pilates for 9 years. I have scoliosis and am a pear-shaped middle age girl, who can do level 2/3 classes but try as I may, my body will not magically (or with concentration, effort) go into that shape. I see this happening and it is a wonder to me that humans can make a roll over happen. Not sure if it is ab weakness or a concentration of weight in my hips, butt, thigh area but try as I do, I have never been able to pull off a rollover. Not sure what to do when they come up as an adaption. Any ideas?

Denee D
Hi Kristi and Amy! Love the roll over, always have. When teaching this move to students there have been a couple times where no matter how hard they try they cant do a roll over on the mat. Only on the reformer when their feet are in the straps, and the springs pull their hips up off the carriage. When trying this move on the mat its like their back is a flat tire,no ROM! Their back just flattens as they try to roll over. I encourage them to use arms for ground force reaction to no avail. Any suggestions?

Kristi Cooper
2 people like this.
HI Denee, I guess the first thing I'd do is question whether the "flat tire" aspect is lack of ROM or simply lack of understanding.If you think it's lack of ROM, I'd reconsider whether these clients should be doing the Roll over until they do have some flexibility in their spines. The equipment can be very helpful in teaching the rollover, but it will be up to you to help them learn to not rely on the straps to get them over. I think it would be a good idea to add assists on the floor where they can't be pulled over by the straps. For example, any thing that elevates their hips from the start. A few towels, hips on a foam roller maybe? A great way to give someone the feel of the rollover is to use the Spine Corrector with them lying over the barrel (shoulder blades on mat). You can guide them into maintaining contact spine to barrel while the legs go over. That's one option I like to use even for myself now and again.

Kristi Cooper
(Edited by Moderator - Alex Parsons on April 1, 2022)
Tina, are you still having trouble with this video? We don't think there is a problem with the video. Sorry for the delay. If you are having any problems along this line still, please contact us at support@pilatesanytime.com

Noya N
1 person likes this.
Hi Helen Huber, I'm practicing many years pilates as I'm an instructor. One things I know for sure is that our body learns and adept fast. Meaning try to change the way you do thing or even think about, in this case, the rollover. Try to work from your bones/pelvic structure. keep the pelvic on the floor en let it be pulled backwards while rolling forward. good luck!

Wendy D
Great video. I like the reference to melt into the mat. Also, seeing the spinal aligment before flexing the feet is fantastic!

Louise P
I have been doing pilates a long time but i still struggle to do the roll over with swinging my legs to take me all the way over, any tips on how to really strengthen my self in this. I find this the same in the open leg rocker too

Theresa Raess
GREAT Amy, thank you both very much!  I struggle to get my right forarm to lie flat on mat as if my elbow is in the way. Any tips on how I can change this?
Top Skip to Latest
Showing 1-10 of 14