Jillian Hessel teaches a Mat workout using the Fitness Ball to work on finding your center. You will concentrate on rhythm, breathing, and balance while doing exercises like Bouncing, Piking, and other stabilization exercises. She begins and ends the class the same way - with deep breathing so you can connect your body and mind. Welcome back Jillian!
What You'll Need: Mat, Fitness Ball

Go to this Program Playlist
This Video
Jillian Hessel teaches a Mat workout using the Fitness Ball to work on finding your center. Aug 14, 2013 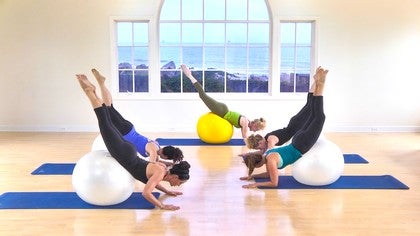 Mindi K
1 person likes this.
Wonderful! Loved the breathing and the inspiring work on the ball--thank you:)

Pamela F
2 people like this.
Loved this one! Please bring more bouncy Fitness Ball workouts! Thank you for the extra care with breath work!

Justy M
I liked the class very much. I felt the work on my arms, buts and abs. Thanks

Linda T
Thanks Jillian really enjoyed it what is the main purpose behind the Ron Fletcher method of belly then lateral chest breathing. This is a new method to me one I have not tried before in Pilates. Thanks Linda

Giuseppe S
1 person likes this.
Thanks Jillian! And if someone says 'Pilates is for women only', I'll push him to do your class

Laura U
1 person likes this.
I loved your class!!! Thanks from Perú!!!

Misty M
2 people like this.
She is a doll! I love her voice, enthusiasm and passion!
Top Skip to Latest
Showing 1-10 of 23