Creating your Own Resistance

Ton Voogt uses his great cues and attention to detail to teach a wonderful Reformer workout. He talks about creating your own resistance so you can get as much as you can out of each exercise. To keep the energy flowing, he adds in a few surprises like a Backstroke-Teaser Combo, Roller Coaster, and Tinkerbell.
What You'll Need: Reformer w/Box, Pilates Pole

Go to this Program Playlist
This Video
Ton Voogt uses his great cues and attention to detail to teach a wonderful Reformer workout. Aug 28, 2013 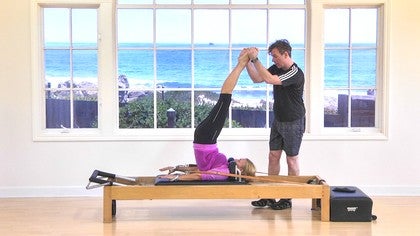 Creating your Own Resistance
Ton Voogt
Advanced
55 min
Michael and Ton Pilates
Reformer
Watch Next
Brett Howard is back to teach a classical Reformer class using the tools he learned from h... May 21, 2012 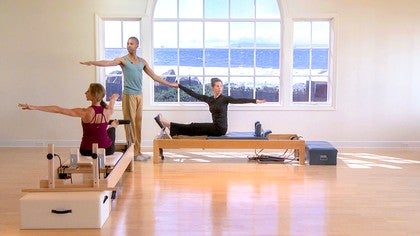 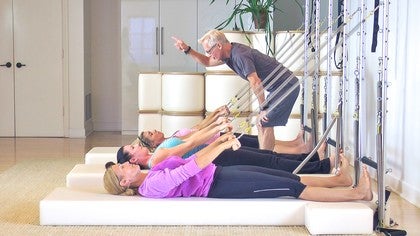 Heidi S
Great fun. Didn't catch what spring load you had on for foot work. No change for arm work so I'm wondering was it light leg work heavy arm or the other way round? Really enjoyed the workout. Thank you

Melissa S
Loved this class! Tom is a hoot, very fun to watch and listen to. I loved the cuing for the Rowing series and the thigh stretch; it really helped me to do the exercises properly. Loved the Roller Coaster and the Tinkerbell!! And I really liked how no muscle group was ignored. Great class!

Kristi Cooper
Heidi ~ the typical spring load is either 4 or 3 springs for footwork... once at the arm work, chances are you are down to 2 or 1 (form and equipment will dictate). At this level (2/3) it is not uncommon that the teacher will omit stating the tension of the springs assuming the students are familiar with the traditional flow and resistance of each exercise.

Anita H
great workout Ton :) would love to catch up with you again! thank you!!

Joshua F
WOAH - Ton, excellent delivery! I was mentally and physically drained just watching you teach!! Great communication of exercises.....one thing though, when you choose the next exercise, are you basing the choice of exercise on the body in front of you, or are you selecting from repertoire which is given in a special order?

Ton Voogt
2 people like this.
Thanks everybody! Glad you are enjoying the workout!
Joshua, this workout was based on Romana Kryzanowska's Reformer work, so it follows her order. I added some variations of the exercises, but the order is what Romana taught us.

Judith B
Great work out. Nice variation. Just how you taught us in Eindhoven in the Pilates Link certification program. Greetz x

Joshua F
Ton, thank you for the response!
I look forward to watching more of your session!
Thanks again!
Top Skip to Latest
Showing 1-10 of 28