Bring out your "Inner Goddess" in this Rhythm Pilates® workout with Lisa Hubbard. After you have finished the Breakdown, you will be ready for the full class set to music. This yoga-inspired sequence includes many challenging exercises like Sun Salutations, Mudras, Boat Pose, and so much more!
What You'll Need: Mat

Rhythm Pilates® Breakdown
Try the breakdown to learn the exercises.

Go to this Program Playlist
This Video
Bring out your "Inner Goddess" in this Rhythm Pilates® workout with Lisa Hubbard. Aug 17, 2015 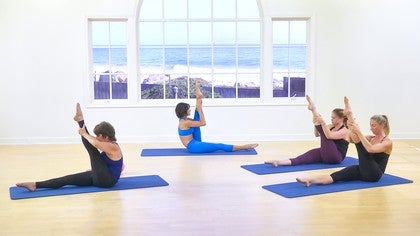 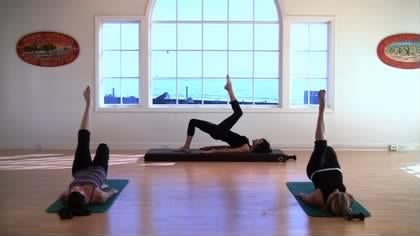 Rhythm Pilates® Breakdown
Lisa Hubbard
Level 2
65 min
BASI Pilates®
#430
You asked for it! Lisa is back with another Rhythm Pilates® workout but this time even th... May 01, 2011

Shan
6 people like this.
Beautiful movement--absolutely beautiful. Fluidity in Motion. It was a very special, unique class. I can decently do the 1st half and need to go back to the breakdown and learn the 2nd half before trying this again. I think it's a pretty advanced class. I really enjoyed it. It was peaceful yet strong. I LOVE the flow and the music. This is a class to keep in your favorites list and to de-stress to. I really enjoyed it and truly look forward to getting better and stronger at. Thank you!

Heike S
5 people like this.
Thank you for this flowing Class, i love it

Judy P
4 people like this.
Love this, the wave of the future...Gorgeous teacher, wisely utilizing color energy, cyan blue. All eyes on beautiful and inspiring Lisa. Once I master the breakdown, I will flow through this like I own it. Masterful selection of vibe music that affects your nervous system in a positive way. I have work to do with this class, but I love it. Thank you.

Lisa Hubbard
3 people like this.
I am delighted to get such wonderful feedback, thank you! I am absolutely am in love the music and appreciate hearing Judy's comment about the vibes and the positive effect that it has on the nervous system. Music to my ears! With gratitude!

Daniela C
2 people like this.
Wonderful class with a great teacher! I love the flow and the music.
Thank you Lisa for this amazing workout:)!

Lisa Hubbard
1 person likes this.
Thank you Daniela! SO sweet, I appreciate it

Elizabeth Y
2 people like this.
I do quite a bit of yoga, so I'll incorporate some of these sequences. I liked the music too. Thanks Lisa!!

Sandra M
2 people like this.
Wow! What a class. I loved it. I am not a yoga person but I loved so much of this that I want to incorporate in some of my mat exercises. Just great. One of my favorites.

Lisa Hubbard
1 person likes this.
Wonderful Elizabeth & Sandra! I'm more of Pilates minded, but adore what yoga has to offer my mental state as well as the physicality of it's deep & intentional work.