Work on maintaining strong endurance during labor and birth with the exercises in this prenatal Mat workout with Leah Stewart. She teaches movements that you can do before you go into labor that will help prepare you for the endurance needed during labor. Strength and endurance are vital aspects for the labor and birth experience, whether it is a short or long process for you.
What You'll Need: Mat, Wall, Fitness Ball, Theraband

Prenatal Mat Workout
Learn some of the different body position options during labor.

Prenatal Mat Workout
Learn about the breathing, relaxation, and imagery techniques that can be used during labor and birth.

Prenatal Mat Workout
Learn how you can stay connected to your body and your baby. 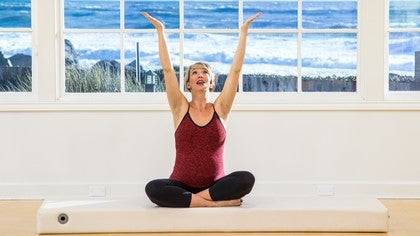 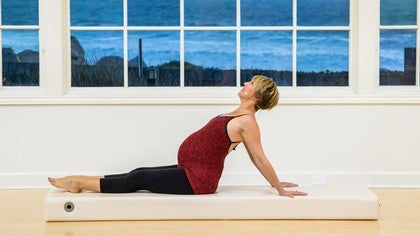 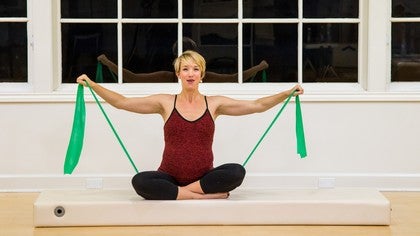 Yvonne W
2 people like this.
Definitely not a fun class, but that's not labor either. I am preparing for my fourth labor. I feel like Leah has some valuable pointers here. Although labor is anything but fun, a successful birth has given me a huger sense of accomplishment than anything else that i have ever accomplished physically.

Laura M
1 person likes this.
Totally agree... such a hard class! So much harder than some of the other normal Pilates classes. Really helpful to feel the fatigue and knowing I need to be able to breath through these positions to find my zen. Thanks for all the amazing classes Leah. This has been so helpful!

Marcela S
1 person likes this.
Thanks for this great class. Question would you recomend a 39week's lady to through this type of contraction mimmics techniques ?

Leah Stewart
2 people like this.
Ladies, I know this class is a challenge, and I am so pleased that you all understand the intention of the challenge and the important role it plays in using Pilates as a labor preparation tool. Marcela, to answer your question, it completely depends on the woman and want her state of pre-labor has been like. At 39 weeks some of this may be too much, but on the other hand, some of the exercises may be helpful. To be extremely general, I would say that these exercises are best started several weeks before a woman's due date, but can be done up to the date if the woman feels energetic, safe and able to do them.

Jennifer Dene
1 person likes this.
At 31 weeks I'm so glad that I've started your birthing series! You're making me feel stronger physically and mentally for labor, and I so appreciate your attention to detail, the explanations behind your moves, and your sunny outlook! Thank you!

Stacy F
6 weeks out from giving birth to my fifth child and this class was challenging, grimacing and amazing! Thank you Leah! :)

Jaime L
1 person likes this.
I’m always so thrilled to have your classes to take, retake, offer and learn from! You’re my go to resource for pre/post natal fitness. My clients sign up for Pilates anytime just so they can benefit from your work. Thanks again!

Kyla F
1 person likes this.
Thank you, Leah! I’m 35 weeks and loving your prenatal classes. The muscular “holds” in this class make so much more sense than the
“Ice hold” they had us practice in my birth class, ha! You are such a wonderful teacher, and helping me feel empowered for my upcoming first birth.

Maryam
1 person likes this.
Thank you Leah Stewart for the great class. good tips for straightening and endurance.

Charlotte F
1 person likes this.
Leah, I can't thank you enough for your prenatal courses and this series in particular. I'm preparing for the arrival of my first baby in as little as five weeks, I'm learning hypnobirthing, gentle birthing, active birthing and attending British National Childbirthing Trust classes (phew), but as a longtime Pilates enthusiast, nothing matches the preparation from you. Thank you so much! Charlotte
Top Skip to Latest
Showing 1-10 of 12