Tracey Mallett is back with this solid Reformer workout. Following the BASI Pilates® block system, Tracey mixes things up a bit by replacing some of the standard exercises with some fun variations. After a gentle warm-up on the Reformer, you'll do Footwork with the pumping variation, the hip work with some single leg variations, and before long you'll be doing the Arms Kneeling Series. As always Tracey brings fun to the workout. You'll be happy to see how much you can accomplish in a short amount of time. Thanks, Tracey!
What You'll Need: Reformer

Go to this Program Playlist
This Video
Tracey Mallett is back with this solid Reformer workout. Following the BASI Pilates® bloc... Jan 16, 2012 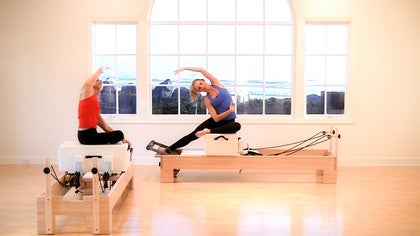 Creative Reformer Variations
Tracey Mallett
Intermediate
40 min
BASI Pilates®
#606
Watch Next
Courtney takes you through a Reformer workout that is "ideal for the client that needs a l... May 02, 2012

Creative Reformer Variations
Courtney Miller
Intermediate
50 min
STOTT PILATES®
#697
A Reformer workout that is all about flow and combinations. Each series will have 5-7 exer... Sep 18, 2012 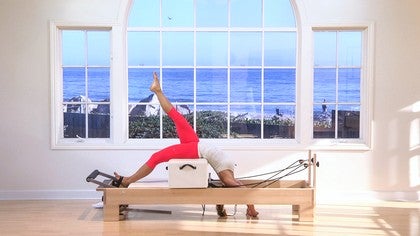 Mary M
3 people like this.
Thanks Tracey for this workout - enjoy all of your workouts - especially the Barre!! Anymore of those classes coming??

Ellen D
1 person likes this.
Simple yet challenging! Thanks i enjoyed it!

Tracey Mallett
1 person likes this.
Thank you guys!! Always so great to go back to a solid, simple Pilates Reformer Class

Pele
3 people like this.
Amazingly fresh. Glad to see Tracey back again.
A very good use of 40 min without too much talk on set up. I feel like I really moved. Thank you.

Jodi R
1 person likes this.
Loved the class, thanks so much!!

Özlem E
1 person likes this.
I loved the class superrrr.... Thanks Tracey and Kristi...

Yugonda D
1 person likes this.
Thanx Tracey !! Really enjoyed all of the fun variations :D
Please don't be so long between classes and yes, please another Barre class :)

Donavan B
1 person likes this.
Congrats on this month's PS cover Tracey!

Theresa
1 person likes this.
Loved the class. Challenging and fun. Thanks so much.

CJ
tracey, you always give great classes. I enjoyed this class. Also thanks Kristi. It feels good to see you both in the class. Hope you will give us more classes. thank you kindly. blanche.
Top Skip to Latest
Showing 1-10 of 37