Objective: Strengthening the back body and shoulders through prone extension.

Reformer Setup: Start with one medium tension spring. Tension can be made heavier or lighter depending on the resistance desired, but proper form and function are more important than strength in this exercise. Place the longbox onto the carriage with the short end of the box against the shoulder rests. The footbar is down.

Start Position: Lie prone on the box, with the shoulders lined up against the front edge of the box and the legs straight and together. Hold the handles in both hands, holding a few inches above the silver buckles on the rope. Let the arms hang straight towards the ground as the body comes to a straight line, neck in line with the spine.

Pulling Straps: Face both palms in towards the carriage. Draw the arms straight back to slightly above hip level, keeping the arms straight and close to the body, with the palms facing in towards each other. As the arms rise, lift the chest in a back extension, keeping the head in line with the spine and the legs together and lengthened. Press the pubic bone towards the box to avoid strain in the lower back. Lower the arms and chest simultaneously to return to start position. Repeat two to four more times.

T-Pull: Reach both arms straight out to the side in a T, in line with the body, and with palms facing the floor. Keeping the arms in the same plane as the body, sweep and reach the arms back to reach in the opposite direction of the head while the chest lifts in a slight back extension. Palms stay facing down while the shoulders find a strong external rotation. Legs stay together and straight throughout the movement. Return to start position and repeat two to four more times.

Go to this Program Playlist
This Video
Muscle Focus: Back extensors. Objective: Strengthening the back body and shoulders throug... Jan 25, 2015 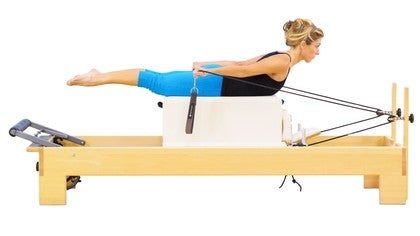 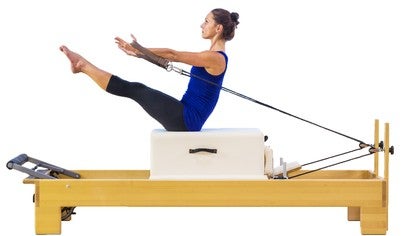 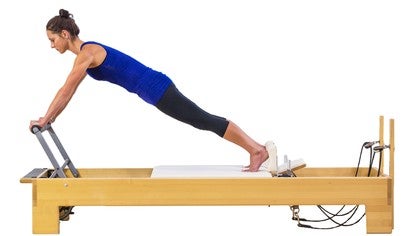 Katia P
Hi I have a quick question about the breathing. I have seen here different instructions about the breath. Rael Recommends to exhale when you are pulling the straps and inhale when you release. Here Amy recommends to inhale when you are flexing the spine. I understand both concepts, I can see the benefits of inhaling as you activate the back extensors so you open the chest, but I also understand the opposite concept of exhaling when the muscle is in action. Is there a right or wrong concept? Or should we use it both depending on the needs of the client? I really appreciate your advice. Thank you so much

Gia Calhoun
1 person likes this.
Katia ~ Thank you for your forum post. I have found this confusing in the past as well because I have learned the breathing for many exercises in different ways. I think they are both correct and can be valuable. I also think that you should use them according to your client's needs as they can feel different. I hope this helps!

Amy Havens
2 people like this.
Hi Katia......I agree with Gia 100% and with you too----depending on the need of the client! I'm a client-centered / student-centered teacher, but with that said, I often adhere to what I learned originally. On this exercise, I was taught to inhale on the lift, and exhale on the return. Possibly it was because my teacher saw that I needed to expand my front body/shoulders/chest with the effort of the pulling of straps. For me to exhale and pull is easy, but my shoulders stay rounded. I needed to widen, open, expand. This is why I teach with that breath. :)

Katia P
Thank you Amy, I love your classes.