Rowing Back and Rowing Front

Objective: Strengthening the arms and stabilizing the powerhouse.

Reformer Setup: Start with one medium tension spring. Tension can be made heavier or lighter depending on the resistance desired.

Start Position: Sit tall facing the back of the Reformer about a hand-distance away from the edge. Legs will be straight ahead in one of two positions: ankles crossed or legs together. Hold onto the straps with the arms reaching out parallel to the floor, hands facing each other.

Rowing Back 2: Start with the arms parallel to the floor and bend arms to a 90-degree angle. Maintaining the shape of the arms, roll back and bring the arms down to the torso. Slightly increase flexion in the spine, then take the arms forward and lengthen the spine. Finish by sitting up tall and bringing the arms back to the start position. Repeat two or three times.

Rowing Front 1: Facing the front of the Reformer, sit tall with the legs together straight ahead. Place thumbs in the straps and start with the hands just outside of the sternum. Reach the arms forward then lower the arms so the hands touch the carriage. Internally rotate the arms as they lift up, then reach the arms out to the side as they lower back down. Bend the arms back to the start position and repeat two or three times.

Rowing Front 2: Starting in the same position as Rowing Front 1, flex the spine forward. Reach the arms out in front and internally rotate them as the spine extends to a flat back position. Sit tall as the arms open out to the side and return to the start position. Repeat two or three times.
What You'll Need: Reformer 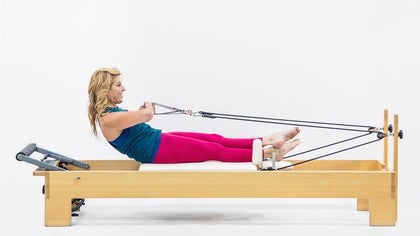 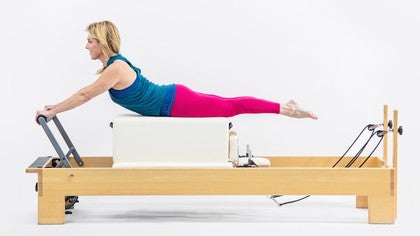 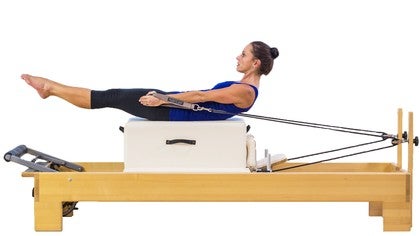 Magdalena O
1 person likes this.
So beautifully taught ! Thank you Meredith so informative!

Lori M
1 person likes this.
Love these quick tutorials! Great reminders/refreshers for everyone and gives all of the teachers' access to all programs rather than just the ones we've trained with. Thank you for taking the time to beautifully cue and execute these lovely tutorials.

Laura C
1 person likes this.
Thank you so much, Meredith and Kristi. I love both your teaching and these short tutorials are so rich and beneficial.

Meredith Rogers
2 people like this.
Thanks ladies!!  So happy to hear that these are helpful for you.  More on the way so keep watch for them.

Michael Mary S
1 person likes this.
These short tutorials are so helpful -- also a good reminder about proper techniques.  Love them.

Heather M
2 people like this.
Thanks. Like much of the world, we are now in lockdown from Corona so it’s such a really great opportunity to review technique and cues

Karen P
1 person likes this.
Thanks so much - so useful, especially if you're a student and in need of tutorials to guide you through each step. Keep it up!

Meredith Rogers
Karen more to come as soon as we are back in the studio!!

Laurence F
1 person likes this.
Hi Meredith, I happen not to have access to a reformer at the moment. Could you give some alternatives with Theraband? I have tried, but it tends to flick a bit, especially when raising the arms above the head... Many thanks in advance...
Top Skip to Latest
Showing 1-10 of 13