In this tutorial with Portia Page, you will learn how to modify and challenge 5 different Pilates exercises: Roll Up, Roll Over, Teaser, Push Ups, and Side Planks. With these tips, you will be able to get stronger and make your workouts better.
What You'll Need: Mat

Go to this Program Playlist
This Video
In this tutorial with Portia Page, you will learn how to modify and challenge 5 different ... Jul 21, 2013 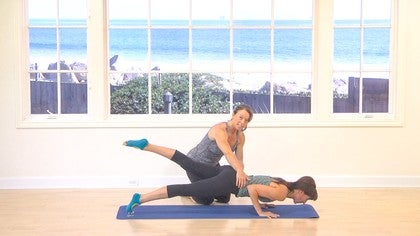 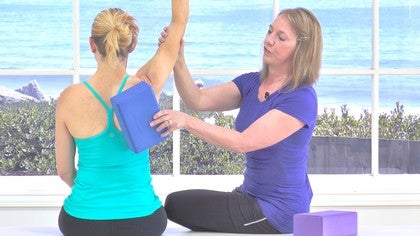 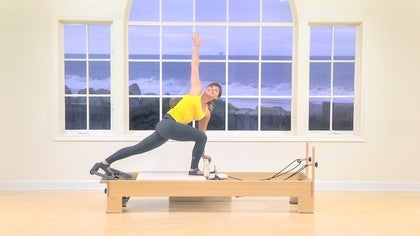 Mary M
1 person likes this.
Thank you Portia and Lizbeth for this very informative tutorial demonstrating the different levels of each exercise. I teach many mat classes that are "all level" and as an instructor teaching and demonstrating these different levels while keeping a constant flow of the class - is a challenge as well. Beautifully done!!

Julie A
1 person likes this.
Loved this. So clear. Thanks both.

Anne W
1 person likes this.
Thanks! Seeing modifications is so beneficial. Good reminders!

Joni N
2 people like this.
Who wouldn´t want to try all of these versions under the direction of Portia with her engaging personality coupled with concise and explicit instructions? Thank you!

Marketa G
1 person likes this.
Very nice tutorial thanks both of you so much.
What do you think about side plank postition or plank pose generaly and hyperextending elbows. Is it there any tip to awoid it? Thanks Markéta

Portia Page
1 person likes this.
Thank you everyone for your positive feedback, I'm so happy that this information is useful to you!
Marketa, in regards to people who tend to hyperextend their elbows, try getting them to engage their upper arms (especially the triceps). Follow up with tactical feedback by manually cueing the Serratus to wrap & support, guiding them to push the floor away. If they are still hyperextend, then try modifying by placing them in a hover (bend the elbows, place the elbows & forearms on the floor, elbows under under the shoulders). This is a good modification for side plank also.

sandyjgrant
1 person likes this.
So nice to see modifications in both directions. I find challenging the more advanced students in a mixed class is always a challenge for ME! Thank you for the ideas.

Amanda H
2 people like this.
fantastic! agree with Colleen more like this please. Beautifully taught and demonstrated, instructions very clear, thank you.
Top Skip to Latest
Showing 1-10 of 14