Join Karen Clippinger in this workshop that presents key spine anatomy with an emphasis on the names, locations, and actions of key spinal muscles. This anatomy will then be applied to provide recommendations and sample exercises to improve common spinal posture problems and to develop core stability with the use of both “scooping” and “bracing.” A schema to help you analyze Pilates spinal exercises will be provided, as well as principles to help you modify, progress and cue select Pilates spinal exercises so that you can achieve greater benefits while keeping injury risk low.

Objectives
Upon successful completion of this workshop participants will be able to:

- Name, locate, and provide the actions of key muscles of the spine

- Apply a schema to analyze the primary muscles used in select Pilates exercises, that can be used to develop anatomically-based cues and enhance movement performance

Go to this Program Playlist
This Video
Join Karen Clippinger in this workshop that presents key spine anatomy with an emphasis on the names, locations, and actions of key spinal muscles. Jan 13, 2017 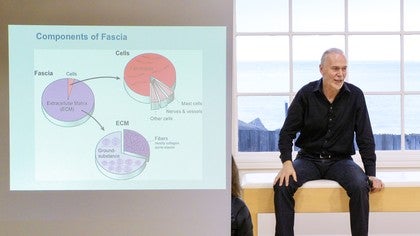 Lila A
I can not watch the work shop,,,

Lila A
From the 2chapter ther is no sound

Karen Clippinger
Hello Lila:
So sorry to hear this. I will let Pilates Anytime know today.

Silke L
The previews are only 2 seconds..

Gia Calhoun
1 person likes this.
(Edited by Moderator - Alex Parsons on April 1, 2022)
Silke ~ I'm sorry you had trouble with the previews. I have sent this to our programmers and it should be fixed shortly.

Lila ~ I tried chapter 2 and the sound worked for me. I recommend checking your settings to make sure the sound is all the way up on your device and the video. If you continue to have trouble, please email us at support@pilatesanytime.com.

Karen Clippinger
Gia:
Thanks. Hopefully all will be fixed soon.
Lila and Silke:
Thank you for letting us know.

Gia Calhoun
Silke ~ Our programmers have fixed the previews and you should be able to watch them without a problem. Please email us if you continue to have trouble.

Lila A
1 person likes this.
So good!!thank you karen

Karen Clippinger
Lila:
Thanks for being persistent and I am so glad you liked it!

Teresa S
When you purchase a workshop video are you able to review it multiple times or is it only a one time viewing?
Top Skip to Latest
Showing 1-10 of 28