Glutes, arms, and abdominals are the focus of this total-body Mat workout by Mariska Breland. Enjoy her clear cueing while trying interesting variations of Tendon Stretch, Spine Twist, Rolling Like a Ball, side-body work, and Jackknife into Teaser, among other exercises.
What You'll Need: Mat

Go to this Program Playlist
This Video
Glutes, arms, and abdominals are the focus of this total-body Mat workout by Mariska Brela... Jun 15, 2014 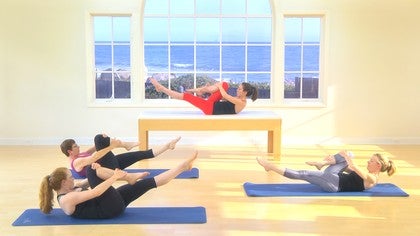 Mat Workout
Mariska Breland
Level 2
50 min
Julian Littleford Pilates
#1728
Watch Next
Alycea Ungaro teaches a Mat workout based on a recent study that assessed people's ability to get on and off the floor with minimal support. Jul 06, 2014 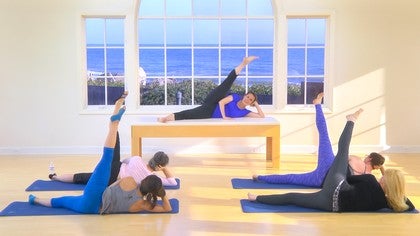 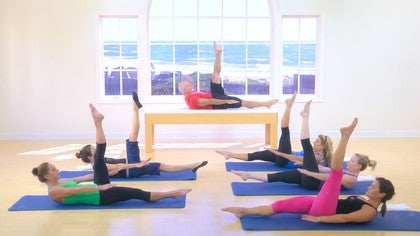 Mariska Breland
3 people like this.
Thanks for welcoming me back Pilates Anytime! I have to give a special shout out to Hailie, who took this class after taking the reformer class before it. Doubling up! Now, that's hardcore!!

Denise S
2 people like this.
It's instructors like you that me glad I r-activated my membership.
Great class!

Sarah T
2 people like this.
I have been using PA for six months now and this is my favourite class so far. Thank you.

Mariska Breland
Glad you liked it!

Anne Sears
1 person likes this.
Another FABULOUS class, thank you Mariska!! I broke my foot 3 weeks ago and cannot do any of my usual activities, but I've been doing your other mat class almost every day (with a bit of modification) and it's been a lifesaver, I'm excited to add this into the rotation!

Joelle G
1 person likes this.
Love your cues, your sense of humor, and your creativity! Thanks for another great class

Lauren A
1 person likes this.
Thank you for another fantastic class! I'm glad you are back :)

Jessica C
4 people like this.
Honestly, I think this is one of the best mat classes I've ever done. I had mom guilt as I started it because my daughter was bummed I wasn't hanging with her... "You always do Pilates, mom..." (which is really funny because our hair was still damp from a little snorkel outing). Started the class, and the cues were so good, the exercises so different and challenging, that I got lost in myself and my body for 60 minutes. Today I type, feeling every muscle in my arm. Thank you!!!!!!!
Top Skip to Latest
Showing 1-10 of 52