If you're searching for a flowing, fast-paced, and challenging Reformer workout, try this class with Brett Howard. In addition to teaching advanced Reformer exercises not commonly taught (like Horseback), Brett mixes in interesting variations and commands precision in the transitions. Don't be fooled by how easy Alejandro and Tetsuo make this demanding class look!

The use of light Hand Weights and a Fitness Ball are optional for this workout.
What You'll Need: Reformer

Go to this Program Playlist
This Video
If you're searching for a flowing, fast-paced, and challenging Reformer workout, try this class with Brett Howard. Aug 16, 2014 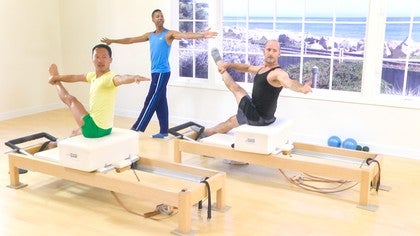 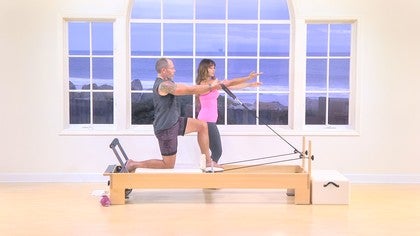 Athletic Conditioning
Courtney Miller
Level 3
75 min
STOTT PILATES®
#1625
Focus on the details to connect deeper to your core in this Reformer workout with Alan Herdman. Nov 29, 2016 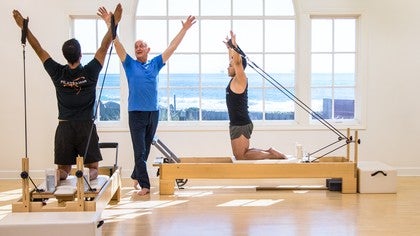 Leslie G
3 people like this.
I love the use of the handweights as well as the fitness ball. Adding the mixture of different adds fun along with challenge to the work! Brett teaches with flai,r and poise great work!

Eva V
2 people like this.
You made my Sunday with this workout! Thank you Brett Howard! The guys are beautiful movers :)!

Holly Holland
2 people like this.
You guys were amazing!

Ashley
1 person likes this.
Incredible workout today! I loved it with mixture inside this workout. Thank you for adding the splits at the end of this workout! Super job everyone!

Pele
4 people like this.
Love the variations, pace, and energy. Usually I find classical style dry but not with this man.

Henry M
2 people like this.
I loved this. More Pilates for men. I have been doing Pilates for five years and absolutely love it. Thank you.

Maryann G
3 people like this.
Classical at its finest!!!

Richard H
4 people like this.
This is a great video, high energy, great form, imagery, cues and more. Rather than having both reformers in the same plane, I would very much enjoy seeing one reformer 90 degrees with respect to the other reformer, so we can see different angles of this beautiful work!!! Thank you for such a great video.

Kristi Cooper
2 people like this.
Hi Richard, Thank you for your important feedback about the Reformer position. This particular option was a change from our commonly used 90 degree set up. Is there an exercise you are interested in seeing from another angle, or a question we/Brett can answer for you based on what you aren't able to see in this class? Again, thank you for sharing your feedback.
Top Skip to Latest
Showing 1-10 of 37