This 20 minute class is a cardio burst! Amy assumes you have a working knowledge and understanding of the "how-to's" of jumping, but does break down the importance of the preparation to jump as well. You'll mainly jump from two feet, varying the spring tension from heavy to light along the way, but some single leg jumping is included also. Take care of your knees! If the spring tension is too heavy at the beginning, please bring it down to a level that suits you. Enjoy!
What You'll Need: Reformer, Jump Board, Fitness Ball

Get Your Sweat On - Playlist 4: Short, Sweet, and Effective Classes

Go to this Program Playlist
This Video
This 20 minute class is a cardio burst! Amy assumes you have a working knowledge and unde... Oct 26, 2010 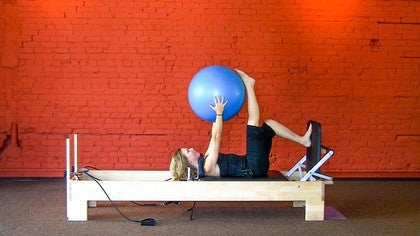 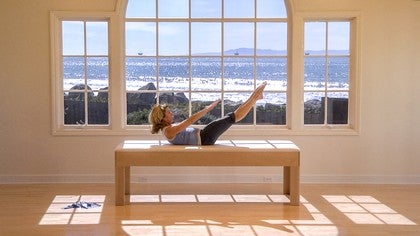 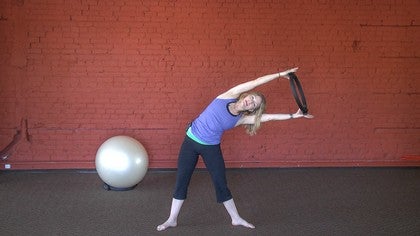 Layla Khashoggi
So much fun, Amy! Some lovely diversions to straight jump board work. Many thanks

Amy Havens
1 person likes this.
Thank you Layla! I love the jumpboard and play with new ideas all the time. I'll have more soon....this was just the beginning! :)

Amy J
Loved it! I will incorporate the ball into my next jump board class.

Mandy Wright
Lovely to hear your cueing and enjoy your creative jump board workout! Thanks Amy. Looking forward to more.

Amy Havens
1 person likes this.
Thanks Amy and Mandy! I too am looking forward to offering more jumpboard workouts. I'll get working on some, enjoy!

Jamie K
this class is just too fun Amy, been awhile since i been on jumpboard. Q? I am 5'6" and have a BB reformer. I ususally leave gear bar on 2nd postion. Noticed with jumpboard tho that I felt kind of crammed in. Did u use a BB reformer here?

Amy Havens
1 person likes this.
Hi Jamie, yes, all of my equipment is Balanced Body. What I suggest to my taller students/clients is to not expect to come all the way in to the bumper necessarily, but rather to pay attention to their foot contact and make sure to land toe, ball, arch, heel and then stop! The taller folks (are those with shorter achilles tendons) sometimes will let those heels lift back up when attempting to make it all the way in, but I stress to them that it's not about that...it's about the quality of the landing and safety in the ankle and knee joints. It can actually becomes more specific of a jump or take off from that point too requiring deep contraction of the gluts to initiate allowing the quads, calves and feet to then follow suit. I'll remember to touch on this in the next jumpboard class and bring in a taller student to do class with me. Thank you for the question!

Pauline Osborn
loved this class! Great workout for a short amont of time.

Thank you Miss Amy! I love the jumpboard and I am always looking for new choreography!

Amy Havens
Thank you Pauline....yes, it's a good little burst of cardio if short on time! And thank you Miss Marta! Yes, I think we're all happy to see new choreography from time to time!! Glad you liked it!
Top Skip to Latest
Showing 1-10 of 59