See what you can do with an advanced student with this Mixed Equipment workout by Deborah Lessen. She teaches Peter Roel, who works with Deborah at her studio once a week. She explains each exercise choice and what is needed for Peter's body to create efficient movement. She also shares what she is looking for while he is moving as well as how she guides him through a class.

This video is meant for teachers to see how they can work with an advanced student. Deborah does not explain each exercise or spring tension as it is designed to be viewed rather than practiced.
What You'll Need: Spine Corrector, Reformer, Cadillac, Weighted Balls, Overball, Pilates Pole 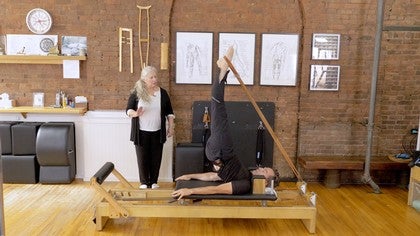 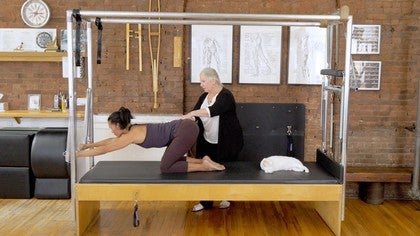 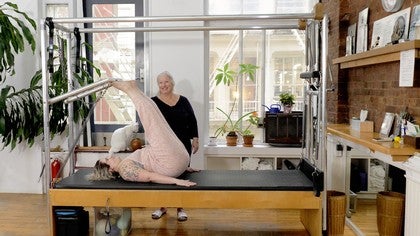 Avishag H
4 people like this.
Thank you so much Deborah and Peter for sharing your exceptional knowledge and experience with us. It was a true pleasure to view the elegance of your movements, Peter.

Lynn P
3 people like this.
It's so wonderful to see teachers working with other teachers. Thank you to you both. Being too mobile myself it's very interesting to see how Peter used the movement to stay within his own skeleton and embody his own needs.

Julie A
2 people like this.
That was beautiful. I will never be able to move like this and that is ok but to see these exercises performed with such grace and strength is a joy, and to witness the connection and respect between Deborah and Peter feels like a privilege. Thank you so much. For those of us who watch with wonder, please, could you do more?

Deborah Lessen
6 people like this.
Thank you for your feedback. Every Pilates practitioner who is focused and serious emanates beauty. Advanced exercises can be a foil. A person's commitment and concentration is what draws us in.

Rachel
1 person likes this.
This is amazing to watch thank you, Peter is a beautiful mover!

KIKE MARIN
1 person likes this.
beautiful and very interesting
thank you very much

Kathleen M
1 person likes this.
Wow - that was an experience! I loved the commentary, so much to take away from this. Beautiful movement Peter.

Brenda C
1 person likes this.
So much information! I loved this! Beautiful !
Top Skip to Latest
Showing 1-10 of 16