Go with the Flow

Ground yourself with this flowing Mat class from Amy Havens. She creatively incorporates the Theraband and Overball throughout the workout, providing opportunity to explore different sensations in familiar movements. Take a moment with Amy at the end of class for some self-care to feel renewed and ready for your day.
What You'll Need: Mat, Overball, Theraband 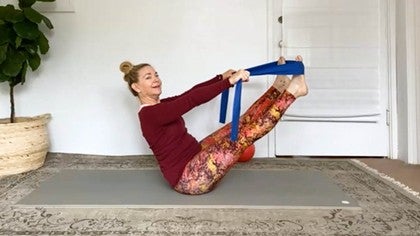 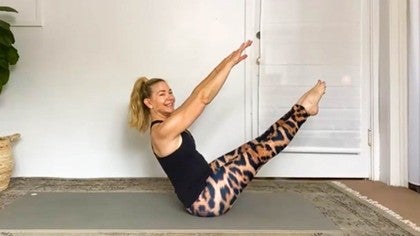 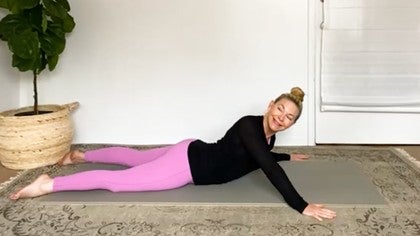 Amy C
4 people like this.
Did this class this morning, EST.  Amy, I loved it!  Thank you for your creativity, your heart, and your fabulous teaching!  Also, for the end comments with a wink of your eye.  I can just guess...In any case, Pilates Anytime is truly a blessing for those of trying to maintain sanity in a crazy world!

Sarah Edwards at Positive Pilates Solihull
1 person likes this.
Great job as ever Amy thank you. Sending love from here in the UK:)

Gary M
4 people like this.
This class was such a nice blend of stretching and movement, that I didn't feel like i was in an exercise class (that is not a criticism). I feel stretched, lighter, and more toned. What a  pleasant hour~ Thanks Amy:)

DJ
3 people like this.
I loved this class - I agree with Gary who said it was such a great blend and I particularly loved the hundred (breathing/imprinting) variation with band over shins.  Regarding inhaling and exhaling through the nose - please could you provide references of where I could learn more regarding this new thinking. Thank you Amy, love from Zambia x

Maria V
2 people like this.
It was very good. I am a beginner and it was a great challenge for me, even if it didn't at first  :) Thank You!

Joan Bee
2 people like this.
Great class, as always! Are you reading James Nestor's Breath? I am and have been focusing on nose-breathing. I especially loved breathing into the Theraband!

Cigdem A
1 person likes this.
Another great class; thank you Amy

Rachel B
4 people like this.
Amy! I watch the recording of your weekly live classes every Sunday. It was become my ritual: Sundays with Amy. I love every moment. Every word. Every ounce of love you give. I find my wholeness with your work. Thank you! ❤️
Top Skip to Latest
Showing 1-10 of 47