Push Yourself and Let's Jump

This Reformer class is going to get you sweaty and out of your comfort zone! Tracey Mallett mixes it up with a combination of Hand Weights, Jump Board, and the Reformer Box. Get ready for a creative and challenging Lunge Series at the peak of the class! You will surprise yourself with just how strong you are!
What You'll Need: Reformer, Jump Board, Hand Weights (2)

Mix it Up - Playlist 1: On the Reformer

Go to this Program Playlist
Full-Body, Core, Resistance May 03, 2021 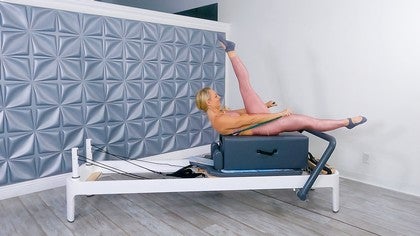 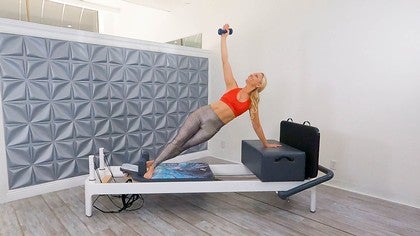 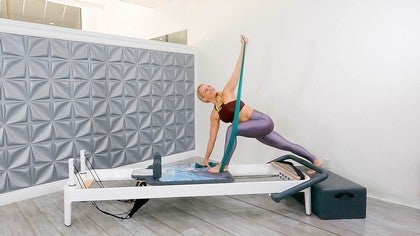 Casey L
1 person likes this.
LOVING this series!  I am constantly cursing you and your "lovely" variations  ;)  but am feeling stronger today and looking forward to more and re-doing this series.  Thanks Tracey!

Molly B
2 people like this.
Love it. I needed a new workout for my cardio day. Thanks!! And absolutely loved the box with the jump board behind it.

rebecca jane
1 person likes this.
hi tracey. love your videos. i use a peak reformer and the springs are different. any chance you could refer to the springs as "heavy" or "light" instead of by the color? thanks so very much.

Tracey Mallett
2 people like this.
rebecca jane Hello sorry about that, yellow/blue spring would probably equate to your half spring.  One red spring would be one of your heavier springs. I work on Stott reformers too but not on a peak reformer.
Thanks and hope you enjoy!

rebecca jane
1 person likes this.
thank you for the clarity regarding the springs. and again, thank you for your lovely, challenging classes.

Jennifer H
1 person likes this.
Such a great class! Love how you breathe life into all these wonderful exercises!

Clare D
I do appreciate your creativity in using all aspects of a bed, but unfortunately (even with a moderately decent home machine) this class doesn't work with the length of my bed / box.  I am sure it works a treat with studio reformers though.  I think I'll avoid all box workouts from now on!  ;)

Clemencia Puerta
1 person likes this.
Fantastic Class Tracey!! Thanks so much... do more Jumping Board Classes please!!... yours are super creative repertoires!

Sharon E
1 person likes this.
I just LOVE your classes! Thank you!

Melissa S
1 person likes this.
Great workout and the jumping sequences really got my heart rate up!
Top Skip to Latest
Showing 1-10 of 27