Anthony Lett joins us all the way from Australia to give us a 65 minute full body stretching workout on the Reformer. Start with the feet, then work up through the muscle groups of the legs and on to the spine where you'll move and stretch through all its ranges of motion. Before class is over, you will also benefit from a few shoulder stretches and some fabulous forearm and finger stretches, perfect for those who use a computer or send a lot of text messages!

This is not your traditional Pilates class. The nature of stretching requires a slower, less dynamic approach. Anthony incorporates the technique sometimes called PNF, Muscle energy or Contract Relax to facilitate deep stretching and release of the whole body muscle. Patience and willingness will be the markers of change here. Enjoy!
What You'll Need: Reformer w/Box

Go to this Program Playlist
This Video
Anthony Lett joins us all the way from Australia to give us a 65 minute full body stretchi... Dec 12, 2012 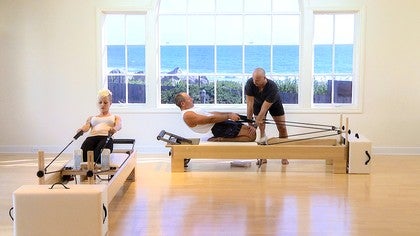 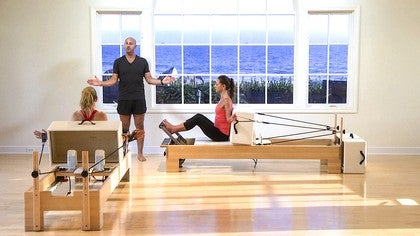 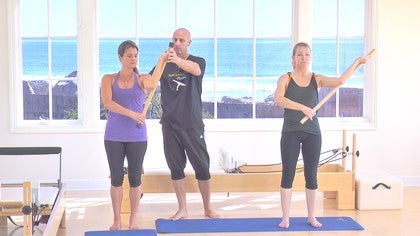 Mary M
That was awesome! Would love to see more!

Hannah M
1 person likes this.
Mary~ We have two more classes coming in the next few weeks!

anthony
Thank you, and happy you both enjoyed it. Feel free to ask questions. :)

Jeannene M
Excellent! Do you cue your students not to stretch into the ligaments?

anthony
Im glad you enjoyed the class Jeanne. I sometimes get asked the question about ligaments. In a beginners class such as this, their end range is far from the point at which any ligaments would be stressed. Generally, so long as you stretch very slowly and with attention, your ligaments are in no danger. Here's a good article on ligaments and stretching for you //www.paulgrilley.com/Paul-s-Writin gs/09.-Stretching-Ligaments-A-Yogi’ s-Apology.html

Jackie K
Loved it Anthony. I have been practicing yin yoga which holds a stretch position for 5 minutes. This is a perfect stretch session on the reformer!!

anthony
Thanks Jackie! Im glad you are able to reap the benefits of both systems. I love Yin Yoga too :)

Julia H
Since watching this class a few days ago I have really enjoyed trying out the stretches. Always so interesting to get a new angle on things.

And the Aussie humour made me giggle :)

Yugonda D
Awesome class, I did the level 2/3 before I realized this class was here and I am so glad I decided to watch. I thought the stretches would be an easier variation on what I had just experienced... Nope... very relevant and I think I will incorporate them individually based on my workout. wonderful technique and beautiful teaching. Thank You :D
Top Skip to Latest
Showing 1-10 of 64