Objective: Stabilizing the powerhouse and strengthening the abdominals.

Reformer Setup: Place all springs on to stabilize the carriage. Place the Longbox horizontally on the carriage, either over the shoulder blocks or just in front of them, depending on what your body needs. The footbar is down.

Start Position: Hook both ankles underneath the strap at the footbar. Sit tall on the box about a fist-distance away from the back edge. Chose one of two arm positions - either stack your forearms one on top of the other in front of the body in a "genie" position, or wrap your arms around your waist, with the hands at the hips.

Flatback: Keeping the legs in the same position as Roundback, hold onto the Wooden Stick with hands placed shoulder distance apart. Reach the arms straight overhead and grow tall and straight through the spine. Press the shoulders down towards the hips and send energy through your heels, activating the backs of your legs. Maintaining the flat back, hinge back on a high diagonal. Keeping the back flat and arms overhead, return to start position.

Tilt: Keeping the same straight back as in the Flatback and with the arms in the same position, lean forward slightly. Lean to the right, with a slight rotation and a subtle arch of the spine to the right. Keep the left hip pressed into the box. Return to center. Repeat to the left.

Twist: Keeping the same straight back as in the Flatback and with the arms in the same position, rotate the torso to the right. Hinge on a high diagonal to the right, keeping the spine lengthened, and the left hip pressing down. Return to center and repeat on the left. Repeat each variation two to four more times.

Tree: Place the wooden stick aside and unhook one foot from the foot strap. Clasp the leg behind the hamstring and sit tall with a flat back. Either pull the clasped leg towards the torso three times or bend and flex the clasped leg three times. Reach the leg straight, walk the hands up to the ankle, and roll back one vertebra at a time through the spine to lower the body down, stopping the leg when it reaches straight up to the ceiling at a ninety degree angle, and walking the hands down the leg as the body lowers down. Curl the chin towards the chest and roll through the vertebra one at a time to curl the body up, keeping the leg at ninety degrees and walking the hands up towards the ankle. Repeat three times on the same leg, and repeat then repeat the entire variation on the other leg.
What You'll Need: Reformer

Go to this Program Playlist
This Video
Muscle Focus: Abdominals. Objective: Stabilizing the powerhouse and strengthening the abd... Jan 17, 2015 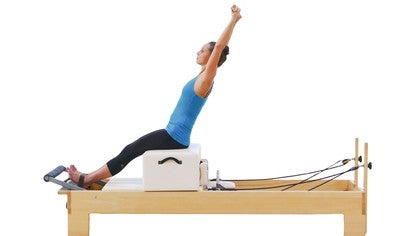 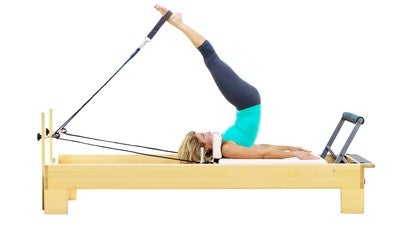 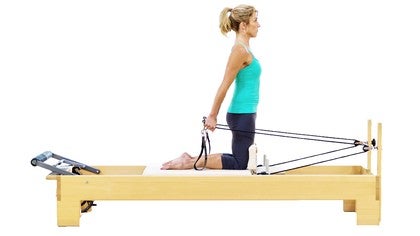 Lori G
I loved the last variation--giving the hip flexors a slight break while still recruiting the legs and abdominals and using them synergistically. Thank you!

Kristi Cooper
Thanks Lori! I LOVE the short box series!

Annie G
2 people like this.
I really love your series,
I'm hoping to see more of this. As a Student teacher it is amazing for review, referral. I Hoping to see more and more of these short video of exercises. Thank you a million time

Olivia M
Would love to see more of these short videos Kristi, they're perfect for teacher training!

Theresa Raess
1 person likes this.
Thanks Kristi, love the way you explain the entire movement.

Jackie D
Hi Kristi Cooper and Meredith Rogers! I love you both so much and just wanted to ask when one does these exercises do the feet touch the front of the reformer (wooden plank) or are they floating pulling towards the outside of the foot strap. I have an equilibrium reformer in South Africa and my feet touch the plank. Should I put the box further back to encourage floating feet? Thanks for your awesome videos!