Kyria Sabin shares the Fletcher Percussive Breathing she learned directly from Ron. She emphasizes how the breath informs and guides the movement instead of being an afterthought. The percussive breathing has a sound and a rhythm, but the intention of this breathing method is to get a deeper engagement of the abdominals and to lengthen the spine with every exhale. In addition to the breathing, Kyria also shares the subtle movements of Ron Fletcher's Imprinting which are very good for the spine.
What You'll Need: No props needed

Go to this Program Playlist
This Video
Kyria Sabin shares the Fletcher Percussive Breathing she learned directly from Ron. Oct 09, 2013 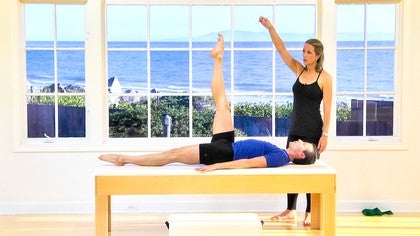 Percussive Breathing
Kyria Sabin
Tutorial
20 min
Pilates History
#1196
Watch Next
Kyria Sabin shares some of the movements that Ron Fletcher developed on the Spine Corrector. May 12, 2014 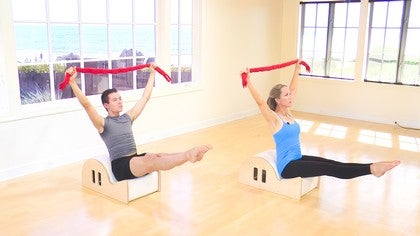 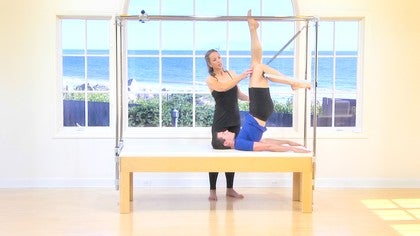 Mahima S
2 people like this.
This is an incredible tutorial- you feel the deep abdominals muscles beautifully!

Gina C
2 people like this.
So beneficial. Thank you, Kyria. :) Definitely on my playlist.

Lorraine E
1 person likes this.
My abs are sore just from watching!

Emma B
1 person likes this.
Hello Kyria,
Wonderful video on the percussive breath, thank you.
Ron's Imprinting piece, I find this challenging, in a good way. When you talk of elongating the spine without a posterior tilt at 12:03, my experience was I could sensate a lot of muscular movement but not so much the elongation of my spine.
So I placed my hand on my head whilst doing this piece so as to see if I could feel it the that way. There was a difference in pressure on my hand so I knew that I was elongating, it's like you say, very subtle.
So my question is, the elongation your talking of is it because your lengthening out the lumbar curve with core control? If you just tilt the pelvis posteriorly to try and lengthen the spine that way it feels like a shortening of the frontline of the body. Was Ron Fletcher after axial elongation thought the back line of the body with core control but accessed it through breath and the front of the body? Is that what the piece is about?

Tiziana N
2 people like this.
I look this video weekly and I learn more and more...Thank you Kyria and Ron!!!!!

Teresa B
1 person likes this.
This is a brilliant tutorial - I've been teaching Pilates for 20 years, and only now through the clarity of this teaching and David's excellent demonstration feel I understand the depth and purpose of Ron Fletcher's percussive breathing. Thank you Kyria!

Burçin A
1 person likes this.
wonderful tutorial. I love how Kyria's instructions are so calm and clear.
Top Skip to Latest
Showing 1-10 of 13