Eve Gentry worked with many people who were in chronic pain. In this tutorial, Debora Kolwey shares a small series that Eve used to help release the chronic bracing that comes when we have pain. She uses the "pole work" to bring movement and circulation back to the body.
What You'll Need: Mat, Pilates Pole

Go to this Program Playlist
Michele Larsson teaches the breathing methods used by her mentor Eve Gentry and shares how each kind of breath can be used in different situations. Oct 09, 2013 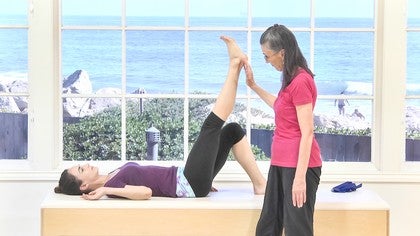 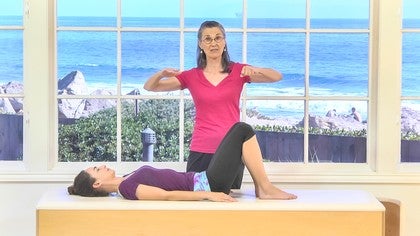 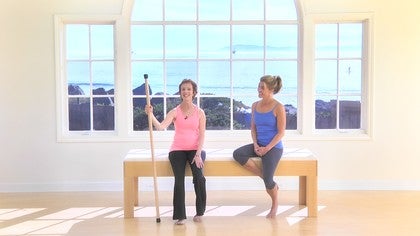 Mat Work
3 people like this.
It would be interestingly to learn if Ms Kristi Cooper felt any "lasting effect" from these exercises, unique to the legendry Eve Gentry.

Silke L
That was very interesting! Debora, would you do that with a client not knowing whether there is an inflammation in the joint or around it? And could you show something similar with back-pain? Thank you!

Kristi Cooper
21 people like this.
I did have lasting effects Mat Work. The ability to let go will always be a challenge for me, but Debora's delivery and these exercises are not far from my mind no matter what i'm doing. What this did for me was show me how free my body can be. So when I do feel that tension I find ways to let go in my body (not often pretty but super helpful). I also really appreciate the communication that happens between Debora and I in this video. It's hard to describe, but it was more powerful than perhaps can be seen by another. Mostly, it was a real sense of presence with her and myself. I think most of my bracing patterns come from thinking about the future or the past. This video reminds me of how important letting go and being present is... and how good (and tingly) it can feel!

Kerry
Very cool! Thank you both so much! Would love to see more of this work.

Debora Kolwey
9 people like this.
As always, I am simply thrilled that these videos are watched and I am so happy with the thoughtful comments. This work, this approach, is particularly beneficial to decrease inflamation in joints. The important point is to work with the client to release holding and bracing...first! The range of motion and small number of repetitions is designed to keep the person below an inflammatory response. Better to do little bits a few times a day, than alot all at once. This, of course, takes patience and committment. That is also the logic of the teacher essentially "taking over" for them, at first. One must establish a relationship and build trust. As Kristi so apty wrote, much of the magic that occurs, does so "in the moment" between the two people; not by merely taking someone through a series of movements. Thanks everyone for your interest. Keep asking the questions!! All my best, Debora

Debora Kolwey
13 people like this.
I would dearly love to return to Pilates Anytime and share more of this approach; be it for back pain, or any joint/area of the body. I hope to return sometime in early 2015.

Michele M
1 person likes this.
Hello Debora, not exactly lunch in Boulder but I was happy to find you here. Thank you for sharing with interesting approach to healthy movement. I look forward to trying this with a few people I know who would truly benefit from it.
Top Skip to Latest
Showing 1-10 of 30