"Are we doing what we think we're doing?"

Join Dr. Brent Anderson in this workshop that looks at how the pelvic floor relates to the abdominal wall and the diaphragm. He discusses how we can facilitate proper organization of the body so our clients can move spontaneously and naturally with pleasure and zest. By focusing on correct alignment, we will be able to move more efficiently.

Go to this Program Playlist
This Video
Join Dr. Brent Anderson is this workshop that looks at how the pelvic floor relates to the abdominal wall and the diaphragm. Apr 29, 2016 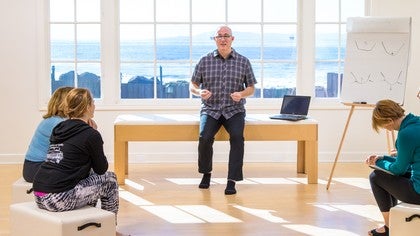 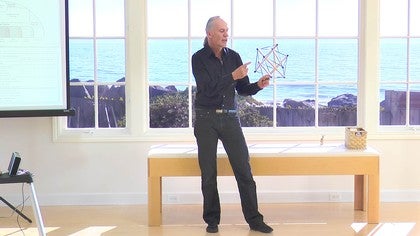 Robyn S
27 people like this.
Ash, I don't think that is a fair comment. The years of dedication and time given to learn and be able to teach with such clarity. I am very happy to receive this information and to pay for it. I can also watch over and over and over! I feel lucky we have this resource. Imagine if we did not have it. Coming from a country of great restrictions and limited pilates education I am still in a position to be very very happy that I have this opportunity. Perhaps if you had to take a flight and pay for accommodation every time you wanted to further your education you might understand. warm regards, Bali Pilates Studio.

Gia Calhoun
14 people like this.
Ash ~ Thank you for your feedback. Many of our workshops include CECs with the PMA so you are also paying for the CECs, not just the workshop. Many of our non-CEC workshops are a lower price. Once you purchase a workshop, you always have access, even if you cancel your account. An in-person workshop usually costs more and you are only able to hear/see the information one time. I hope this helps explain our pricing!

mary ann stuart
12 people like this.
Getting CEC's in my own home, and having the accessibility to revisit such high quality material is worth it's weight in gold. As a very busy instructor and studio director, I find these videos to be the most cost effective way to keep my PMA education up to date. The workshops are great! Thanks Pilates Anytime!

Christina C
5 people like this.
Best $69 I've ever spent and I'm only halfway through. Thank you guys for offering this online!!!

Cara Reeser
9 people like this.
Brent, This is a wonderful course for our community of teachers. So refreshing to hear you say it like it is and help dispell some of the mythology in the field around this topic. Bravo and thank you. Cara

Maureen M
4 people like this.
I have so appreciated this workshop and the message it conveys. Over the past three or four years, I've enjoyed and been inspired by the paradigm shifts in our profession and the progress and (sometimes uncomfortable) change it allows us to experience as teachers. There's so much totally cool research and science now, pelvic floor, fascia etc etc...and the mountain of collateral information is mind boggling! We can't ever stop studying, and learning. Thanks to all of you out there in PA land who provide us these opportunities.

Ruth B
2 people like this.
Thanks so much Brent, I love this course!
And to the PA team, I think the price of these courses are brilliantly affordable. I am so appreciative especially since I live on the west coast of Ireland now and for me to take many of the courses I would like to take I would have to either spend considerable time in Dublin or fly to England. With two children, the service you provide is for me, a lifesaver to furthering my Pilates education. I am lucky to have received my certification with Kelly Kane, and I am so so happy to have discovered this totally amazing resource. I am constantly recommending Pilates Anytime to teachers and students alike!

Jenny R
2 people like this.
This was a really wonderful workshop and the mat class is really invaluable. I'm so grateful to be able to continue learning from my own home while I have little ones. The value of the content is certainly worth the price. Thank you Brent and Pilates Anytime!

Heather P
2 people like this.
I can not begin to tell you how absolutely wonderful and knowledgeable this workshop and final class is. We never stop learning. I have spent a lifetime researching ( nearly 30 years) as I started with backpain at 20 years old that affected my life and then late 20's with incontinence. By 30 I had the best pregnancy with no back pain or incontinence. I have researched and experimented. From weight training, kegals, (vaginal kung fu no less!) to Pilates to Hanna Somatics and Feldenkrais, to now barefoot running. This is an absolute delight. All of it all put together makes so much sense. I can not recommend this enough. Thank you so much for all the questions, research, shared knowledge, ever expanding. I loved how many of Joseph Pilates concepts were re-explained to what his purpose and intention was. I have recently been working (teaching) with the combined diaphragm and pelvic floor instinctively, so this was just so reassuring and exciting.
Thank you again.

Holly P
3 people like this.
Thank you so so so so so much for this workshop. I'm not crazy! Yay! As an LMT and pilates instructor so many cues have never made sense to me. I love the way you talk about the body and that we don't have to force it, it wants to do the work naturally. For those who are concerned about the price of these workshops; you get CEU's, you will likely spend $60-$90 on a private lesson and may not get this level of information, you can revisit this information over and over and over and over until it sinks in. The Runity workshop is amazing if you haven't done it. Thank you Brent and Pilates Anytime!
Top Skip to Latest
Showing 1-10 of 36