Look at the benefits of partnering in Pilates with this quick tutorial by Debora Kolwey. She uses a few examples on the Mat to show how these techniques can help to pick someone out of tension or tightness that may be preventing them from doing a movement. If we can release our habitual patterns, we start to see the potential of how the exercise should feel which helps improve our practice.
What You'll Need: Mat, Pilates Pole

The Teacher's Corner - Playlist 3: Speaking with your Hands 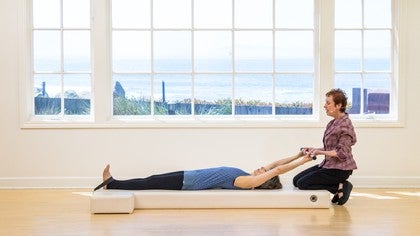 Benefits of Partnering
Debora Kolwey
Tutorial
15 min
The Pilates Center
#3064
Watch Next
Take your practice to the next level in this challenging Reformer/Tower workout on the ... May 14, 2015 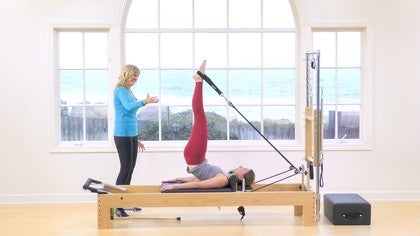 Reformer/Tower Workout
Connie Borho
Mod. Pace
Level 2/3
75 min
Peak Pilates
#2182
You will put together the puzzle pieces that are required for Overhead in this tutorial with Clare Dunphy. May 01, 2016 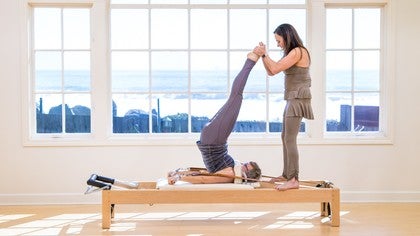 Jill
I was so jealous of Ruth while watching this, Debora! Yummy stretches. I can't wait to use these techniques with my Sunday peeps.

Lynn
2 people like this.
Thanks Deborah, this was great. With respect to jackknife and other inversions, this is exactly the place where I struggle and I totally get your point. I absolutely end up tugging on my back line from sacral to cervical and pay the piper the next day. Thinking of buying time for the open hip makes so much sense. We need to think less about stretching and more tensegrity of the whole.

Patrick
I'm really enjoying these tutorials with you Debora. You've stoked my curiosity with discussing how our bodyweight is supported (or not). I'm finding such inspiration from you and it makes me hungry to do and teach Pilates. Thank you! And thanks Pilates Anytime for bringing Debora to the world.

Kathleen
Love the idea that a Pilates' instructor is a "partner" in creating the ability of the client to feel the energy of the movement.
Thank you Deborah for your depth of understanding and expressing it to us.

Denee
This is amazing and very helpful. Thank you so much Deborah

DJ
Love this I instinctively do this as an instructor to some extent, but this tutorial has given me permission to utilise these sorts of techniques more. I am sure everyone can benefit. I would be interested to know if you would allow students to partner each other for certain exercises ?

Debora Kolwey
Dear DJ
I am a DJ, too! (Debora Jean) I do, on occasion have the people in the class partner each other. I get a reading first. Usually I can tell from their faces if they are excited by the idea or wish I hadn't brought it up! Sometimes I hesitate to ask because I worry they will think it takes too much time to organize, but inevitably they enjoy it, get some laughs and helps people get to know each other