Elongate your spine with this Mat workout by Amy Havens. She plays with breath so you can compare and contrast how it can impact how you feel each exercise. She also uses the Magic Circle during the whole class to create length in your body and to challenge you in a different way.
What You'll Need: Mat, Magic Circle

Go to this Program Playlist
This Video
Elongate your spine with this Mat workout by Amy Havens. Dec 07, 2016 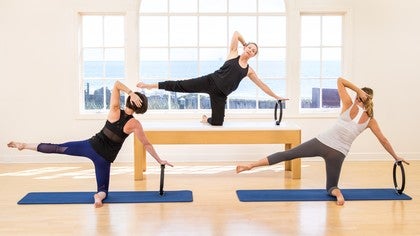 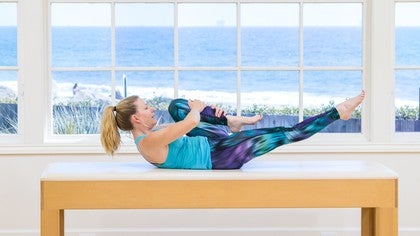 Mat Workout
Amy Havens
Level 2
50 min
Pilates Conservatory®
#2783
Feel the differences between the two sides of your body in this Mat workout with Amy Havens. Sep 15, 2016 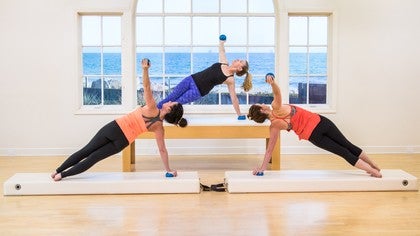 Emily K
2 people like this.
That was a helpful tip on the roll up to pull with the thumbs on the Magic Circle. I found that it made the movement go more smoothly than the usual instruction to squeeze the Magic Circle on the roll up. Those kneeling side leg lifts and then pulses were challenging - I liked it. I hope you will do some more Magic Circle videos.

Connie M
1 person likes this.
I love the magic circle! Thank you Amy!

Emily H
1 person likes this.
LOVE! The breath cueing was so spot on! Thank you!

Jennifer S
1 person likes this.
Studied this one last night.....prepared my sessions today using some of the gems in here. KAPOW - perfect sesh to start the new year. The strength moves sneak right up on you!!!! For example, SSLS pressing into the ring, side leg series on the knee, swimming from DLK....to name a few Amy, thank you thank you. I learn so much from you....and PA. My best investment EVER!

Amy Havens
Jennifer....thank you SO much for this comment! It means so much to me knowing that I'm helping other teachers and guiding you along and motivating you, giving you ideas from which to create class programming too. Thank you!! And from all of us here at PA....we appreciate you!!

Josephine W
1 person likes this.
I say WOW!!!! I just had a massage Friday and I needed to find a good workout and stretching at the same time. LOVED IT. I found something that really work those knots after teaching my SPINNING class.

Amy Havens
Thank you so much Josephine! Glad you enjoyed this class!