As another follow up to the First Time Client workshop, Alycea Ungaro shares a program she imagines Saundy would be doing after about 30 sessions. She starts on the Mat, with exercises that could be used for a home program and then moves on to the Cadillac and Ped-O-Pul. She focuses on transitions and creating an internal resistance to set Saundy up for success so she can build strength in a safe way.
What You'll Need: Ped-O-Pul, Cadillac, Mat, Mixed Equipment

Mixed Equipment Workout
Follow up on the work Alycea did with Lisa in her first session. 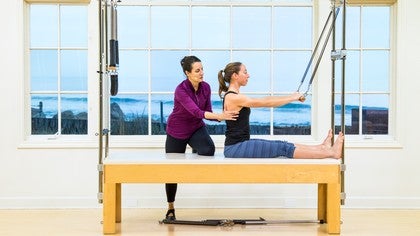 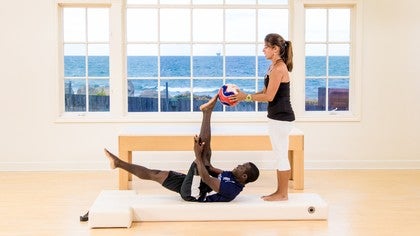 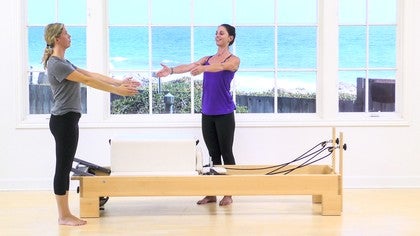 Mastaneh N
1 person likes this.
Hi Alycea, thanks for the class. I have a question about the position and "attitude" of the client's leg /foot when doing these movements in supine and side lying: when the leg is rotating laterally, this objectively laxes the periformis: which as far as motor control goes....it isn't gonna set up anyone for safety and movement confidence. The other point I would like to know your opinion is about is: if the floor work is designed to give a client home programs, then there seems to be a lot of exchanges between the teacher/therapist and client that might give the impression to the client "as long as I the teacher is here you should be in the safe range, position, etc.". Also, why is the standing ballet stance adopted in mat work? I'm curious to know if there is any reasoning behind this or is it another case of "just because".

Alycea Ungaro
Hello Mastenah -I will happily put on my Physical Therapist hat to answer your initial questions. I'm not a "just because" kind of girl! Can you tell me specifically which moves you are referring to in your first question?

Ewa D
1 person likes this.
gorgeous work-out; so small moves count! I never feel fed up with Alyceaaaaaaaaaaaaaaaa:) Love her:)

Mastaneh N
Hi [Alycea, thanks for your prompt reply. I am specifically asking about the feet/legs in the legs in springs but also in the side kick. Also, could you educate me on why one has to put their physio hat on to answer the enquiry? I have seen even a few professors of physiotherapy totally ignore the most basic alignments concerns in a 'patient' that was seeking remediation/education from them. It is worth mentioning that in the chest expansion exercise you are allowing your client to sheer acros their lumbar vertebrae as if the wight of the structure above it was to be supported by the spinal processes. If logic be applied bringing the edges of the shoulder blades together places the amazing balance of the seratus muscle out of action. Could this actually benefit the action of rib movement?

Alycea Ungaro
5 people like this.
Mastenah - we all speak through the filter of our training. I hear in your language that you have a bodywork education. There is much variation across differential studies. Static vs. dynamic is one example. Massage therapists do not observe muscles and tissue in the same way an exercise professional does, and neither come close to the chiropractor's analysis. In putting on my P.T. hat I simply wish to reveal what paradigm I am sharing.

Using the leg springs in external rotation is a mechanical choice that mimics the footwork and other positions on the reformer. I employ a "systems" approach to Pilates whereby exercises are performed and re-performed across many apparatus. With respect to anatomy, weak gluteals are far more common in the average human and contribute significantly to back issues but also to hip, knee and ankle problems. Working the gluteals in extension and lateral rotation simultaneously increases recruitment and therefore strength.

I would disagree with your two statements that muscles have been turned "off" by specific positions. That's not really the way human kinetics work. Gravity and the fibrous connections of the particular muscles and the movement executed all play a part in muscles turning on or off. A great idea for a panel discussion at a conference someday!

Thanks for your comments. I hope to meet you at some point.

Mastaneh N
1 person likes this.
Thanks Alycea Ungaro for your reply. You are prsenting an interesting view of looking at the weakness in the gluteus of the general population. The main flaw in this generally accepted view is one simple and objective principle: THE CURVES OF THE HUMAN SPINE and every single muscle that attaches to them function as a dynamic whole only when the human has leanred how to related them to one another so that the curves are in the FRONT of the spine rather than the back, which is what is generally accepted as the norm. Again, I bring your and your esteemed colleges attention to the "chest expansion" exercise: There is more hurt on the lumbar spine there than a so called strong gluteals could ever counteract. Kindest regards from Australia!

Lissa D
I thought you were fabulous Alycea and will incorporate some of the cueing with my clients. Thank you!!

Tine D
Thanks a lot Alycea, - for sharing your thoughts and Great approach to teaching different People!!! Makes me so happy everytime I see a new class from you!! You oppend my eyes at the last PMA! Love your style! Thanks

Silke L
I find this really helpful and I love the way you teach and give your client the confidence to find strength! I would work with only some clients in this way and I am happy for the inspiration! Others might need a different program and maybe more release work on balls etc. That is the great thing about looking at just one body, - one human. And it even takes different approaches on different days... Thank you, Alycea and PA
Top Skip to Latest
Showing 1-10 of 14