Welcome to Class 3. Today Adrianne works on challenging the stability in your powerhouse with exercises that will test your balance and endurance. She progresses some of the exercises you know from the previous classes, adding props and variations to strengthen your arms and legs.
What You'll Need: Mat, Wall, Triadball, Hand Weights (2), Fitness Ball, Reformer Box 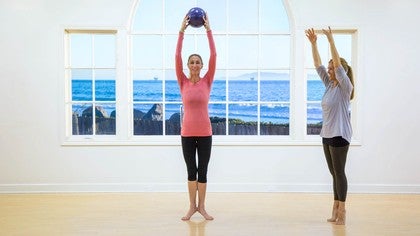 Colleen C
4 people like this.
I love your style of teaching. This is a great video! Very detailed .

Cigdem A
1 person likes this.
I loved the foot work and the cueing; simple but should be taken as a serious class for balancing and controlling the daily movements ... thank you Adrianne

Rajashree Srirangarajan
Love this session! Thanks.