Niedra is back with another great mini class demonstrating more ways to open up and stretch the shoulders. Using the Gondola Pole (or broomstick) and the spine corrector, several exercises are offered to help combat the affects of working with a computer all day or driving in your car too often.
What You'll Need: Spine Corrector, Pilates Pole

Go to this Program Playlist
Begin class lying on the foam roller in preparation for opening the chest and shoulders. F... Jan 02, 2013 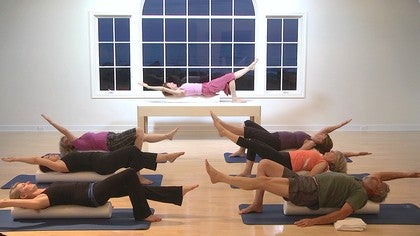 Mat Workout
Niedra Gabriel
Level 1/2
60 min
The Pilates Guild
#911
This Video
Niedra is back with another great mini class demonstrating more ways to open up and stretc... Jan 08, 2013 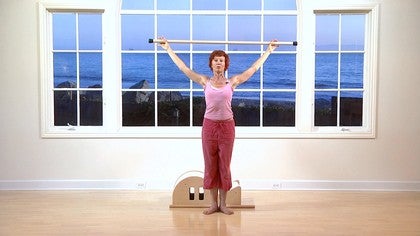 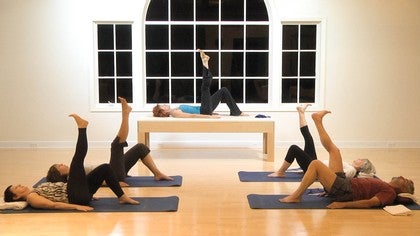 Yugonda D
perfect shoulder warmup, I often feel tight going right onto my Reformer so this was wonderful :)
Thank You Niedra

Pamela F
Oh, thank you! I just rec'd a Spine corrector and this is a nice little routine I can use to open up my shoulders and continue to improve my posture.
Grazie from Italy!
-Pam

Niedra Gabriel
I just love that you are in Italy and enjoying this class. Prego ( I think this is thank you is in Italian.)

Pamela F
Ciao Niedra!
Grazie is Thank you! Prego is You're Welcome!

Niedra Gabriel
Grazie Pamela, I need to get my italian straightened out for better effectiveness.
and Holly - you are just a busy bee veiwing all the routines, I love it.

Barbara K
This was amazing! What a fabulous spine workout. And in just ten minutes. I can take a break from my computer everyday to do this easily. Thanks so much!!

Niedra Gabriel
1 person likes this.
You are welcome Stacey, I often spend a lot of, sorry to say, hunched up computer time, so I do know how wonderful it feels to get your body back. Glad the stretches did the trick for you.

Patti S
Thank you Niedra- I enjoy your teaching so much- your love for your work really shines thru!
Top Skip to Latest
Showing 1-10 of 16