This lesson about having fun and playing with concepts of the Mat. The theme of the day is Rolling Like a Ball, which is re-introduced in several creative ways throughout class. This is an advanced class that includes Scissors and Bicycle, Open Leg Rocker "no hands" and The Splits out of the Side Leg Work. Enjoy!
What You'll Need: Mat

Go to this Program Playlist
This Video
This lesson about having fun and playing with concepts of the Mat. Mar 03, 2013 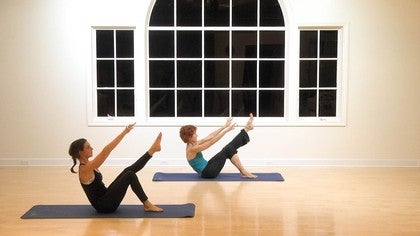 Mat Workout
Niedra Gabriel
Level 3
45 min
The Pilates Guild
#960
Watch Next
The experienced practitioner knows it often doesn't take a full hour to get an incredible workout in. Mar 04, 2013 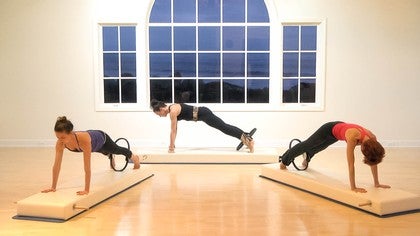 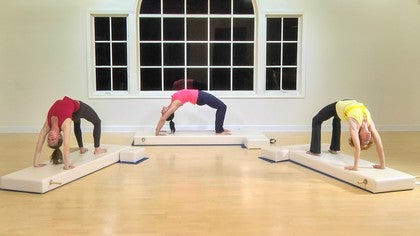 Monica S
1 person likes this.
a smiling teacher for a concentrate lesson!!fabolous!txs a lot!!

Niedra Gabriel
1 person likes this.
Thank you MOnica, I just checked your history and you ROCK, you view loads of classes so you must benefit and love this work.
I hope you teach as well - someone who loves the work this much should be part of a community.
Thank you for your lovely comment.

Denee D
1 person likes this.
Your dance backround adds so much flavor to your classes, love them all. Look forward to more.

Laurie K
Whew, just when I thought I was advanced!!! love the core and flexibility challenges and the "let's have fun with this" spirit!!! more, more, more please!!!

Niedra Gabriel
2 people like this.
the challenges with this work never end ... aren't we lucky to be so fortunate to get to be challenged and stimulated this way?

Karine Capdevielle
Hi everybody and thank´s Niedra for this class.
I have a question about all the class i.m taking i still have problem in my back ...i.ll get burn all the time even if I put something between my mat and my lower back....and it help me to goes up in the rolling up without I cant get up without gather speed and can keep my foot root on the floor....( Sorry for my english...) thank´s for your answer and enjoy your day! Karine.

Pepper
1 person likes this.
What fun - Im really only a level 2 but I'm so happy I tried this class what amazing positive energy - thank you

Niedra Gabriel
Hi Karin, without seeing you I am guessing but here are some suggestions ( I looked at your photo and tried to figure out your body story from your face and I " think" you have a flat back? and you are stiff in your lower spine? I expect you should spend time on the partial roll back - not go all the way to the floor, and really work on rounding both the shoulders and hips on the way down - hold your knees and do not try to work with strength but stretch out your back. once the spine gets looser it will be easier for your muscles to elongate and allow for fluid motion.
If this does not help and you would like a private on line session - please email me directly niedra@spirit-moves.com, and we could set up a session where I could see you via the internet and see what you are doing and perhaps help you unravel some of your restrictions.
Best of luck and keep doing classes - this is all part of the journey of becoming more of who we are - and you are a fabulous artist.

Danette T
Loved this class!! I feel taller and ready for my day. Thank you!

D.
Teacher and exercises give positive energy!
Top Skip to Latest
Showing 1-10 of 34