"Before a Maple leaf falls off a tree, it turns it's brightest color." - Augie Nieto

Mari Winsor is a pioneer in the Pilates community because of how she made the method accessible to the public. In this inspiring interview, she tells us how she started Pilates and opened her studio, and how she went to study with Romana Kryzanowska when she knew she needed more training. She then goes on to discuss her first infomercial, which is the most successful fitness infomercial on TV! Mari's biggest challenge now is fighting to stay positive after her diagnosis of ALS. She says her silver lining is that she can still function, teach, and inspire. This desire to help others makes her such a remarkable person!

Find out more about ALS and the hope to find a cure by donating to Augie's Quest. All of the proceeds go to ALS research.
What You'll Need: No props needed

Back to Basics Reformer
Reformer Workout with Mari

Go to this Program Playlist
This Video
We interviewed Mari Windsor, a pioneer and inspiration in the Pilates community. Oct 30, 2014 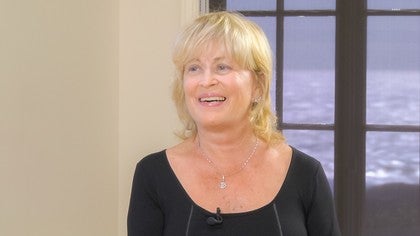 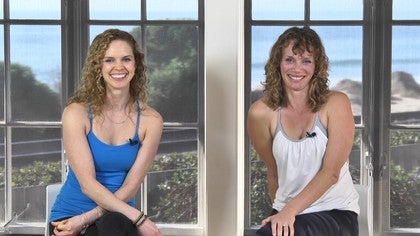 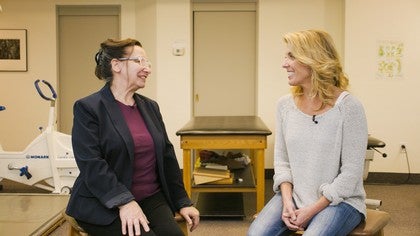 Roxana M
2 people like this.
I have to be honest, I really didn't know anything about Mari Windsor nor delved past the thought of her as the 'informercial Queen'. My eyes have been opened (delightfully). I did her reformer class 2 days ago and midway through I was smiling and said out loud 'I really like this woman' -- her presence, her mischief/humour and her teaching points. Thanks to the PA gang for offering us a deeper look at Mari and of course Mari for sharing. You don't have to worry, you are definitely still inspiring ;) plus you get 'mad props' cause you're the drunk girl from Smooth Criminal!!!!!! Best music video of all time!!!!

Mariska Breland
1 person likes this.
Love, love, love! Thank you for sharing your story (and kudos to your doctor for recognizing that for neuro conditions, Pilates is the best form of exercise). All the best to you.

Annie M
2 people like this.
Mari was my very first introduction to Pilates. I bought her DVD after I had my first baby. I was never so sore in my life! I was immediately hooked. And now, 13 years later, here I am teaching the method she made me fall in love with. Thank you, Mari, for all you have done, and continue to do for our beloved community. You are a remarkable person. A true gift. I am honored and thrilled to carry on the Pilates tradition and hope to inspire others as you have inspired me. Thank you for sharing your story and your insights. I will keep you in my prayers. XO

Lynn P
Mari: you are the light of Romana and the light of a great woman with so much caring and depth. A true visionary. I know you will succeed in your biggest challenge yet. The pilates community is so lucky to have you as a key figure to look towards.

Kim W
1 person likes this.
I, too, bought the videos (have the mat!), copied the "choreography", and taught classes at my workplace 13 years ago. Now I am well on my way to being comprehensively trained and certified, actively teaching The Method every day, and I have Ms Winsor to thank. Thank you for sharing your story. Awesome inspiration.

Lisa M
1 person likes this.
Wow .. Pilates changed my life.. And it continues :)

Deborah Wasko
1 person likes this.
Mari, thank you for the light that shines through you. This interview is priceless. Wow !!!! Truly Mari, you are inspirational :) I am praying for you in Chicago !!!!

Sharon M
Mari What an amazing women u are, my son in law has just been diagnosed with Motor neurone disease or as it is called in the states ALS, being a pilates instructor I hope I can help him, my son has MS and Pilates has changed his life .

Annie P
Mari introduced me to Pilates as well. What a brilliant lady.

Yoly N
So beautifully eloquent. Thank you for sharing.
Top Skip to Latest
Showing 1-10 of 23