Build trust into performing the Snake and Twist with this tutorial by Benjamin Degenhardt. He shares a few pointers that will help you progress these movements as you advance in your practice. He also shows how a strong start position will make a huge difference with these advanced exercises.
What You'll Need: Reformer (No Box)

Swan Dive Progression
Learn stepping stones that you can use to progress to Swan on the Reformer.

Go to this Program Playlist
This Video
Progression, Technique, Advanced, Break Down Oct 08, 2017 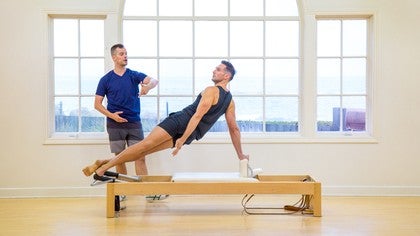 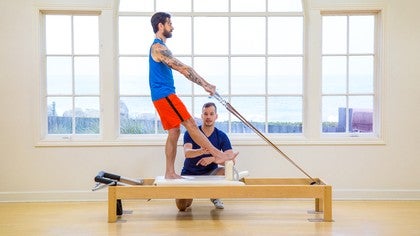 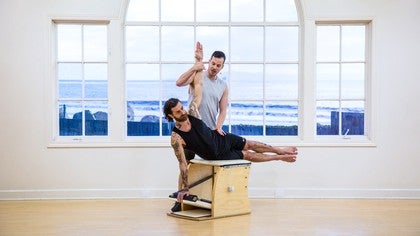 Kathleen S
4 people like this.
Thank you for the detailed explanation of Snake. The slow precise demonstration, plus your verbal cues give us thoughtful insight into proper biomechanics for safety of the spine. Your knowledge is appreciated, Benjamin.

Chrystelle C
3 people like this.
Beautiful and so helpful. Once again, I love this short video detailing a single exercise and well done to the model!.. Already cannot wait for the next one!

Kathleen M
6 people like this.
I like how you explain lifting the hip up and away from the hand on the shoulder block to create length in the waist. Well said!

Deborah (Roberts)Soules
2 people like this.
Beautiful teaching, beautiful work. Benjamin, your teaching has such clarity. My wrists have become weak so I've backed off one of my favorite exercises. This tutorial has given me confidence to begin anew. Thank you!

Benjamin Degenhardt
2 people like this.
Thanks everyone! Kathleen, Chrystelle, and Kathleen , so glad the breakdown and concepts behind my approach to this exercise resonate with you! Deborah (Roberts)Soules , I am stoked to hear you feel renewed confidence to give it a go — keep me posted!

Jean A
1 person likes this.
Absolutely loved this thank you Benjamin Degenhardt !! Great cues, love the attention to the hip away from hand, makes perfect sense. I love and hate this exercise but this tutorial has really helped me iron out my creases!!

Lois S
1 person likes this.
Amazing Benjamin! Perfection with cueing and demonstration! I did it!!

Tama S
1 person likes this.
Not only is you teaching fantastic, where did you find that model! between you two snake & twist look easy.

Bonnie G
1 person likes this.
Woot! That high footbar is NOT for the faint of heart! Wonderful breakdowns Benjamin! And kudos to Gregory for hanging in there throughout!

Rachel
1 person likes this.
Thanks so much for this breakdown Benjamin and cueing fantastic very helpful! For the breathing, you mention exhale on twist so is it inhale on press out and pull back up?
Top Skip to Latest
Showing 1-10 of 25