Work on body alignment and symmetry in movement during this Mat workout with Kathy Corey. She uses helpful tools to increase body awareness and to correct imbalances that have developed after breast cancer treatment. She also uses the CORE Band™ to add resistance exercises so you can begin to engage the support muscles of the shoulders, upper back, and arms. If you don't have a CORE Band™, you can always use a Pole, Towel, or a Stretch Out Strap.

Many of the exercises in this class are only done of the affected side of the body to promote symmetry during recovery. You can always repeat the movements on the other side if you want to work both sides of the body.
What You'll Need: Mat, Small Tennis Ball, Stretch Out Strap®

Go to this Program Playlist
Use breath to promote symmetry in the body with this Ped-O-Pul workout by Kathy Corey. Feb 07, 2016 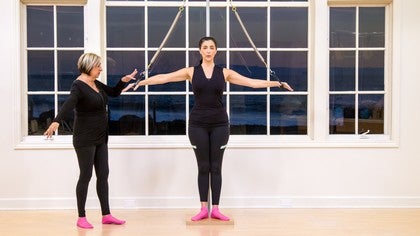 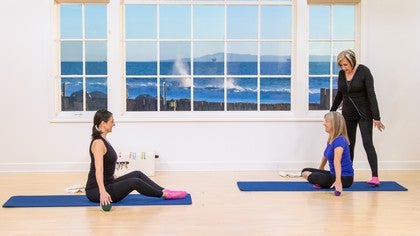 Breast Cancer Recovery 5
Kathy Corey
Level 1
25 min
Kathy Corey Pilates
#2468
Watch Next
Janet shares how it helped he regain her sense of self after her diagnosis of breast cancer. Jan 26, 2016 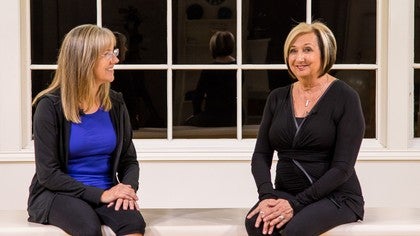 Mercedes G
The coreband is a great tool for this job. Thanks Kathy for showing this work.
And adhesive tapes....What a great idea!
Good morning from Argentina!
Skip to Latest