Kathy Corey teaches a Mat workout designed to help those who are recovering or who have recovered from breast cancer. She concentrates on arm and shoulder mobility, breath work, and body alignment so you can work toward symmetry and increase your range of motion. These gentle movements will help your quality of movement and awareness which strengthens your foundation for recovery.

This is the first class in a three-part series on breast cancer recovery. Watch her introduction, where she tells us what to expect from each phase and how her program can produce long-lasting results for recovery. You can also hear the inspiring stories of the women in the class, who have all survived breast cancer in the Breast Cancer Student Panel.
What You'll Need: Mat, Small Tennis Ball, Overball

Go to this Program Playlist
This Video
Kathy Corey teaches a Mat workout designed to help those who are recovering or who have recovered from breast cancer. Feb 12, 2015 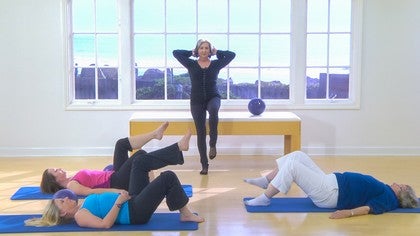 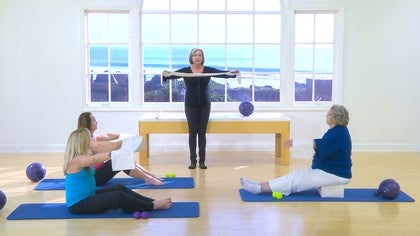 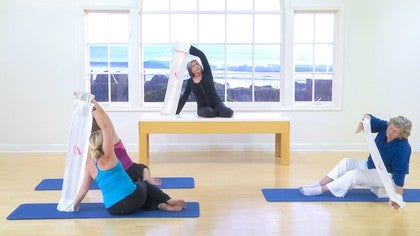 Avishag H
This was great! Thank you! Really interesting and informative, so well explained. I will implement this in the program of one of my new clients who is after breast cancer. Thank you so much, Kathy!!! I wish we had more of these kind of sessions.

Kristi Cooper
Avishag Haynon, Thank you for your comment. There are two more like it coming soon. Kathy is also actively developing other programs that we hope to bring to you.

Kathy Corey
3 people like this.
Thank you. I really see a great need for these programs. I am continuing to develop the work and I am glad to share it through Pilates Anytime.

Connie M
Thank you Kathy! I am going to start seeing a new client this coming Saturday. She had a double mastectomy four years ago so I can't tell you how helpful this series is going to be for me. Thank you again for providing it

Luna H
Yes,those videos are very helpful.And when will phase 3 come?
And unfortunately, I only have one mat and some bands and balls.Hope there are more work out with mat haha. Thank you.

Jennifer S
Love these methodical approach....the phases....going for quality! thank you! sharing your work at my annual breast cancer awareness fundraiser! The alignment awareness w ball under head and knee circle - love that for ALL!

Kathy Corey
Thank you so much. The program is very important and getting the word out helps everyone.

Sarah Edwards at Positive Pilates Solihull
Thanks Kathy - really enjoyable. As a 'newbie' teacher, I think many of these principles could be applied to clients regardless of breast cancer rehab or not. For instance I have a small class with older clients - thinking the pelvic clock could be performed seated in a chair for range of movement...lovely thanks!

Kathy Corey
1 person likes this.
Thank You. The Pelvic clock sitting in a chair works very well and all our clients benefit from the deep work.