Play with the Theraband in this Mat class by Meredith Rogers. She uses the band to help you get more out of your workout. She starts with a standing warm up to help you create space in your spine, then moves on to more challenging exercises.
What You'll Need: Mat, Theraband 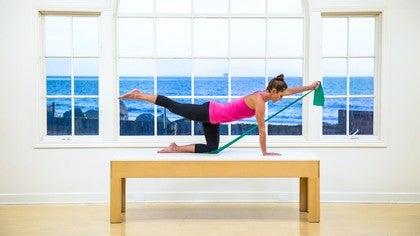 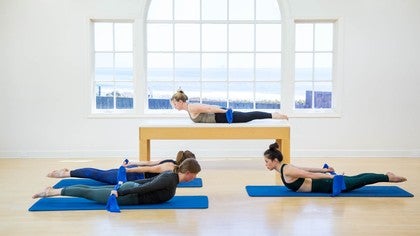 Angela
24 people like this.
You don't know me Meredith, but for a half hour a day, you become my best friend. Thanks for all the great classes you post.

Beverly L
3 people like this.
As always, such a good class, thank you!

Lina S
3 people like this.
Great and fun class! I've liked the quadruped with the band. It's a nice variation.

Cigdem A
4 people like this.
Time passes so quickly when I join your classes...thank you

Lisa F
1 person likes this.
Very nice class. I like the new ideas it gave me.

Ida H
1 person likes this.
That felt sooo good. Really hit all the areas I needed with the band. Will repeat for sure! Thank you 🎈

Kandie A
7 people like this.
woohoo! Just made it through my first month of my year-long goal of daily pilates, thanks, in no small part, to you Meredith Rogers and Amy Havens! Thank you!!
Top Skip to Latest
Showing 1-10 of 119