Strength From Inside Out

Welcome to Class 1. You will gently build strength from the inside out with this movement class by Adrianne Crawford. She encourages you to listen to your body while working through modified exercises that will help you build sensory awareness, balance, and overall strength. She shows how you can use your unaffected side to help your affected side increase mobility and range of motion.
What You'll Need: Mat, Towel, Reformer Box, Theraband 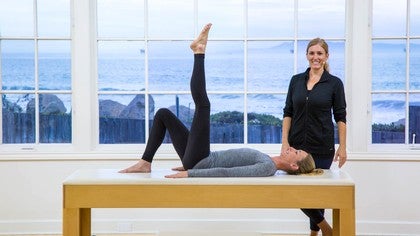 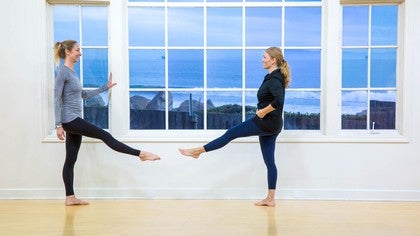 Lisa N
I am recovering from abdominal surgery & found this really useful. I will continue with the course. Thank you

Doris K
Thank you Adrianne for this series of classes.

Lina S
I really felt the wrist exercises! I find this class useful. Some moves can be used for strength recovery but as well as gentle stretching.

Anne L
1 person likes this.
is it ok to articulate the spine with osteopenia or osteoporosis?

Kathy O
I finally started doing this classes and found them very useful (had compression fractures in my spine and diagnosed with osteoporosis). Thank you Adrienne.

Zoe P
I wouldn't do an articulating bridge with someone who has osteoporosis - too much flexion. A neutral spine bridge would be better I think?  Rotation is also definitely  contraindicated for rotation Osteo too...I did my polestar training a year or two ago tho so that might have changed I guess.

Amanda L
Hi! Working with a lady who is recovering from brain surgery just 3 months ago; she had an aneurism on her brain. Am going to try some of these with her as mobility and control are very limited. Any suggestions for exercises are welcome.